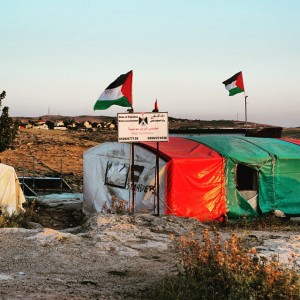 In the rocky and dry hills south of Hebron, many communities struggle to maintain their lifestyle based on shepherding their flocks and cultivating their fields. These hamlets made of tents and caves are a testimony to a lifestyle that survived through the generations and they have adapted to the changes of time. Regardless of what the residents of these communities desire for their future, it is their sheer existence that is under threat by the Israeli occupation, mainly in the form of oppressive military rules and aggressive settlement expansion. The story of Susiya is representative of many of those challenges to continuous Palestinian existence in the South Hebron Hills, and it is also unique in its own sense.

Like many of the villages in the area, evidence of human presence in Susiya goes back thousands of years, though it’s a bit hard to verify it’s continuity throughout all these periods. For its residents, its rich past was their condemnation when Israeli authorities decided to evict them based on the heritage value for Jews. In 1986, 60 families were forcibly displaced when their village was declared an archeological site by the Occupying force, i.e. Israel, without any compensation. The villagers that struggled to stay were scattered around the remaining plots of the 6,000 dunums of Susiya’s land, which had also been partially taken over by the nearby Israeli settlement established a few years before the expulsion (circa 1983). The settlement was named after the Palestinian village and called Suseya. A synagogue outpost was established where Susiya once stood, along with an archeological park. Despite having some of its land legally under their possession, the residents of Susiya found it practically impossible to rebuild their homes on their own land, due to severe restrictions of Israeli military laws in the West Bank regarding any Palestinian development, especially in areas close to settlements, within settlement municipal boundaries (around 40% of the West Bank), or firing zone practice areas of the Israeli military (about 18% of the West Bank).

Since it occupied the West Bank in 1967, Israel has put in place a Kafkaesque system of Military Law and cherry picked laws from previous rulers (Ottomans, British and Jordanians) according to whatever suits them best according to their intentions. One example is the necessity to have a building permit from the State in order to build any structure legally. The measure for failing to do so, however, comes from the laws issued by the Occupying State, i.e. Israel, that demolishes anything that it is built without its permission. Since the Oslo agreements, this rule applies to Area C (61% of the West Bank) and East Jerusalem. More than 95% of the building permit requests are refused by the Civil Administration, the Israeli army branch that deals with “civilian affairs” in the occupied West Bank. The requests that are approved, are usually in a tiny part of Area C (corresponding to 1% of that whole area) and which is already densely built up. In order for Palestinians to remain in their own villages, the only alternative is to build without a permit and, if possible, try to pursue a legal case to halt the demolitions as long as it is possible.

Due to the laws restricting (or effectively preventing) any construction even in one’s private property, the villagers of Susiya were unable to rebuild the village legally in the eyes of the very same State that expelled them from their original homes. In 2001, the village was completely destroyed and its residents forcibly displaced again. They didn’t gave up, and rebuilt it again. Other demolitions happened and new demolition orders kept on coming for the new buildings, but the villagers stood fast. With the assistance of lawyers from Rabbis for Human Rights, they decided to submit a Master Plan to the Israeli authorities. The plan was rejected by the Civil Administration and the residents of Susiya appealed to the Israeli Supreme Court, which will consider it on August 3, 2015. However, a decision from one Supreme Court judge might seal the fate of Susiya even before the judgment. 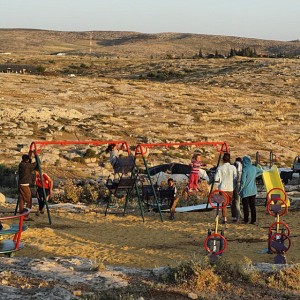 On May 5th, 2015, High Court judge Noam Sohlberg, a settler from Alon Shvut settlement, denied the request by Susisya’s residents for an interim injunction on all demolition orders until the final decision by the Supreme Court. This means that more than 100 houses, the kindergarten, the school and the clinic from this village can be demolished by the Israeli authorities at any moment, displacing more than 300 Palestinians from their residences. The villagers are persevering and are acting together with other Palestinian, International and Israeli peacemakers to save Susiya from destruction. Here is a CPT video with a resident of Susiya giving a short explanation as well as a call for support. A Facebook page  and a blog have been created to update and gather support for this cause. Petitions including this one from B’Tselem are circulating to gather signatures in support for Susiya.

Rabbis for Human Rights has more information and videos here.

Operation Dove – Video of a demonstration in Susiya on May 16 here.