Israel’s August 16th military raid on the Fawwar refugee camp, just south of Hebron, left a 19 year-old Palestinian dead, dozens seriously wounded, and hundreds upon hundreds gravely traumatized. Israel claims that the raid, which lasted nearly twenty-four hours and was carried out by hundreds of soldiers from three separate military battalions, was a security necessity. Scouring the camp and searching somewhere between 150 and 200 homes, many of which were ransacked, Israeli soldiers turned up next to nothing: two pistols, plus a commando knife and military equipment such as a canteen, flak jacket and helmet which troops most likely left behind in previous raids. Beyond these meager findings, soldiers made an uncertain number of inconsequential arrests.

In view of these outcomes Israel’s “security necessity” rationale for the raid appears patently indefensible, leading some to speculate that it was in fact a training exercise for the three battalions. From a wider angled perspective, training exercise or not, all those familiar with the dynamics of the Israeli occupation recognize the August 16th raid as a trademark example of Israel’s overarching and brutal strategy of collective punishment and mass intimidation in the West Bank.

Samer Hjouj, friend of CPT and author of the following narrative account, was born and raised in Fawwar.

I wake to the sound of screaming. Screaming and multiple tear gas canisters fired no more than ten meters away from where I lie.

I close the windows and rush to check on my grandparents. They’re both in their 80’s and won’t be able to handle even the smallest amount of tear gas. It’s just the three of us in the house. I ask my grandparents about what’s happening, and they appear to have no idea. They’re completely unfazed and ask if I’d like some tea.

I go to the rooftop to see what’s happening. A dozen soldiers are standing outside our neighbor’s house. Information about what’s going on begins to spread, rooftop to rooftop. In terms of area, Fawwar is extremely small—its 9000 residents are crammed into less than .3 square kilometers. Nevertheless, the camp’s population ever increases. Because there is nowhere to build, people build up. It has become natural for neighbors to communicate across their rooftops.

I watch the soldiers move from house to house, supposedly searching for weapons. They dig up a garden bed in the yard next to ours, but find nothing. They leave that house destroyed from the inside. Every home in our neighborhood is searched except ours. They arrest a few of my neighbors. I get a phone call from my mom. She’s staying with family members who live on the other side of the camp. She asks about my safety. I’m baffled because I thought there were only a dozen or so soldiers in the camp, but she tells me there are hundreds, and that they stormed the camp from the top of the mountain. Fawwar is nestled at the foot Al Qre’ Mountain, where we Palestinians are not allowed to farm or build. Towards the middle of the day several groups of soldiers have taken over four houses on the upper side of Fawwar—the part of the camp where my grandparents live. In the lower part, where 90 percent of the refugees live, soldiers have taken over dozens of houses and snipers have positioned themselves on the rooftops. We’re told that they’re shooting at anything that moves. In comparison, our neighborhood is calm. Soldiers need only point their guns at kids or get into position to scare them off. They’re not shooting live fire (yet). I take advantage of the calm around my street and go outside, no particular destination in mind. The first thing I see is a group of children playing. I watch as they take turns lying on the ground, waiting for their friends to pick them up and parade them down the street chanting the all-too-familiar refrain: al-shaheed habib allah (the martyr is loved by God). The kids, each no more than ten years old, remind me of a shaheed from two years ago.

On August 10th, 2014, Mohammed Khalil al-Anati, an eleven year-old boy in Fawwar, was shot in the back and killed by Israeli soldiers who were passing through. I remember watching as thousands paraded the child through the camp chanting before his burial.

I decide to take photos of the children playing shaheed. I feel compelled to document their simple, unspeakably tragic game. I’m not sure what to make of it, but I’m deeply troubled. I think to myself: If these kids were truly dead, people would elbow their way through a dense crowd to get photos of them. I think to myself: Why are they doing this? Is it a wish to be immortalized, like so many killed at the hands of the Occupation? Is this all they know? 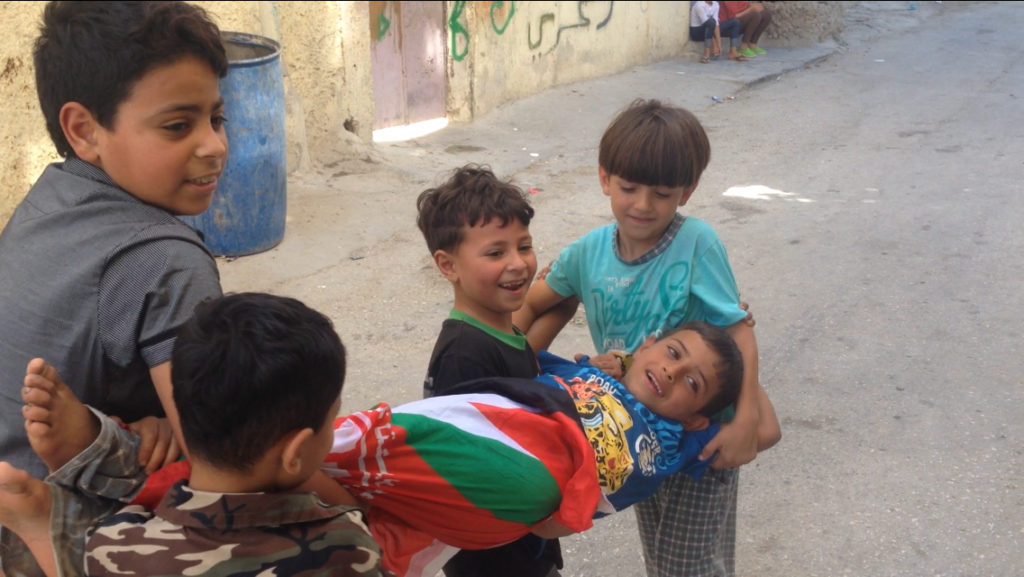 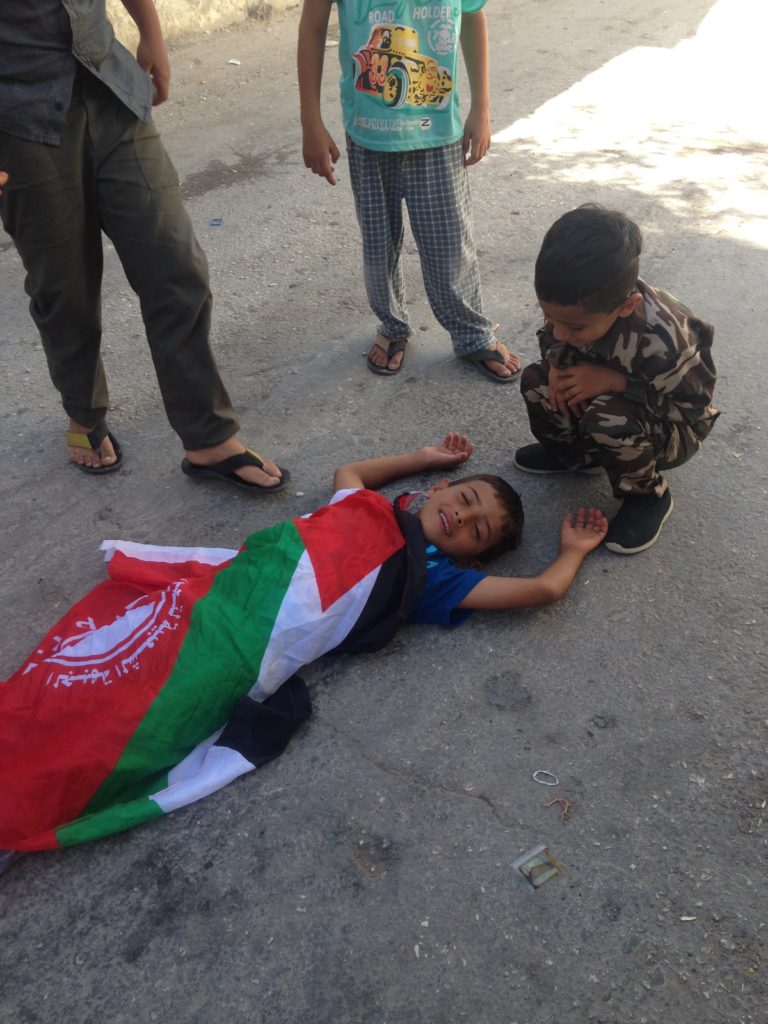 As a witness to their innocence I see that these children are only repeating what their ears have heard and what their eyes have seen. They don’t know that this is not normal.

It breaks my heart.

It breaks my heart because I know that for them this actually is normal. These children know the chants far too well. They’ve internalized the customs attached to death by gunfire. A big part of them is expecting the game to become reality. They await their turn to be the shaheed.

A few hours go by. Word has spread that over fifty people have been shot and one has been killed. We go back to the rooftops. Thirty soldiers have returned to the street where I watched the kids playing. Before the soldiers leave, they fire live ammunition at those very same kids, in the very same spot that they pretended to be dead. Luckily none of them are hit. The next day, we parade the body of Muhammad Abu Hashhash, 19 years old, through the camp. We chant and praise the newest shaheed. We hold him up. We take pictures of him. And his name echoes throughout Fawwar.