Update on 11 year old Ali al-Joulani from al-Khalil after he sustained serious injuries from a 10-meter fall, after Israeli forces chased him up his roof. See previous report on his fall here.

A week after he fell from the roof of a 3-story building, scared of fully-armed soldiers and trying to escape them, 11-year old Ali is back at home, but due to his injuries he is fully dependent on his family to take care of him.

Ali, a sixth-grader that wants to become an engineer and build a home for his family one day, is now at home with two broken arms, a broken leg, various missing teeth and a broken jaw. Ali’s father has given up his job in order to take care of his son. Ali is neither able to eat normally or get out of bed on his own. With his broken jaw, so far Ali’s only been able to eat soup, and he is barely able to speak. With both his right leg and left arm needing two months to heal, he won’t be able to attend school for this time. He will be missing out on essential classes as well as his sixth-grade exams. He’s already had to undergo one surgery to put a platinum-plate into his left arm, and still requires another surgery for his jaw, as well as treatment for the teeth he’s lost and broken from the fall. 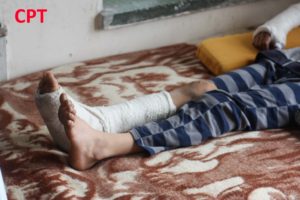 Even though Ali was scared of the soldiers before the fall, he is now afraid whenever someone knocks on the front door; fearful that soldiers will come and arrest him, just like they tried to take him away when he fell off the roof.

Before this incident the al-Joulani children were mainly playing inside the house, in order to avoid any contact and harassment from the Israeli forces. Now, Ali’s father wants to move his family to Jordan.

Still, the family is grateful that their son and brother survived the fall. During the whole visit by CPT, Ali smiled only twice: when his father said he wants to move to Jordan, and when his father told CPT that Ali wants to be an engineer and build his family a home. Despite the injuries caused by the Israeli forces, Ali’s family hope he will still be able to achieve his dream of becoming an engineer. 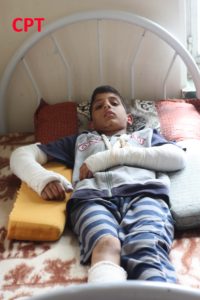