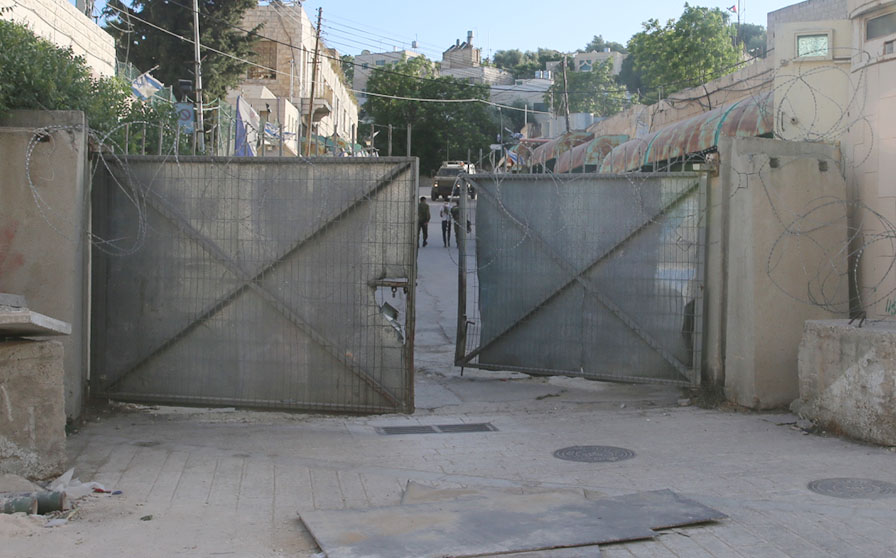 There is a group of boys from the Old City of Al Khalil/Hebron who congregate in the evenings at Bab al-Baladiyeh, the old municipality square, to kick around a soccer ball.  There aren’t very many places to play in the Old City but this is one of them; a space only large enough to play a 3-touch game up against a wall, right opposite of the Israeli occupying forces military base.

I had seen the boys playing several times as I walked through the Old City, but the day I finally found the courage to join in the game would forever change me and my understanding of the reality of living under occupation in Palestine.

It happened quite suddenly as the news spread around town; soon every kid I passed on the street knew my name, a small crowd would gather in the square, and my non-existent Arabic vocabulary now included three words: she plays soccer.  This new-found fame opened doors into homes where I was welcomed like family and my dust-covered pant legs and scuffed shoes – although initially to my embarrassment – became a testimony to the joyful new friendships.

As the games became more regular and teams began to form, we made plans to hold a soccer tournament across neighbourhoods in the Old City.  The idea was to reclaim space and to ensure the the right to play for the kids in al-Khalil, as stipulated in article 31 of the UN Convention on the Rights of the Child.  One of these spaces is Bab al-Baladiyeh, which is under constant security surveillance by the military base, and the other is an area that used to be the playground for the Ibrahimi Boy’s School but has since been occupied and paved over by the Israelis to use as a parking lot outside the synagogue/mosque area.  The Tel Rumeida neighbourhood has a playground area, but it is not accessible because the Israeli military strictly controls entrance to Tel Rumeida for residents only.

A few days before the first game was scheduled, Israeli Border Police shot a 20 year old man in the mosque area.  Israeli forces increased security measures in the area and in order for the boys to get to the parking lot for the game they’d have to pass through one of the most heavily patrolled checkpoints.  With the volatile behaviour of the military, it was just too much risk.

In the days following the clashes, the phone calls increased.  Only this time it wasn’t soccer scheduling.  The boys were calling us frequently to let us know the soldiers were in the streets.  As a form of collective punishment, the soldiers began a manhunt throughout the Israeli-controlled H2 area of al-Khalil, conducting ID checks and intrusive body searches of almost every young man walking or driving through H2.  They carried photos of boys throwing stones during the clashes, asking local community members and threatening families for information on the boys’ whereabouts.

On Monday May 1, Amir* appeared at the bottom of our staircase, breathless.  The soldiers had taken his brother Yousef.  We ran to Bab al-Baladiyeh, but it was too late.  He had already been put in a police jeep and taken to the police station, later held in a detention centre in a nearby settlement, and then transferred to an Israeli military prison outside of Ramallah.  While Yousef was being taken away, the soldiers continued their patrol through the neighbourhood and found Motasem sitting on the staircase by the sweet shop.  They surrounded him, grabbing him firmly by the arm and leading him down the street and inside the military base where they questioned him for 20 minutes before releasing him.

We still tried to meet up for soccer when we could, but Yousef’s absence was felt.  Some kids from Tel Rumeida came down to the Old City one night and we found an empty parking lot to play in. Samir and I were too tired to play so we resorted to cheerleading from the peanut gallery.  That was the last day I saw him.  Two days later the soldiers raided his house at 4:00am.  When they couldn’t find him they threatened to arrest his two brothers and would not return their IDs.  Samir turned himself in the next morning, Monday, May 15.  His family knows nothing about his court case.

On Wednesday, May 17 on my way home from Bethlehem, I ran into some of the boys hanging out in the square.  With soccer out of the question, we decided to grab some snacks and hang out at Abed’s house.  Just as we were leaving Bab al-Baladiyeh, Abed turned around to go back for a bottle of coke.  Suddenly, three soldiers came running out of the tunnels, one of them grabbing Abed by the neck.  Abed was able to pry his way out of the stronghold and escape running as the soldier ran after him.  Not having caught Abed, the soldier returned to the square and grabbed his friend Aziz who had been trying to negotiate with the other two soldiers.  The three soldiers held Aziz in a chokehold for 3 minutes while he struggled to breathe, smashing his head against a steel door causing him to bleed, and then dragged him inside the base where they blindfolded him.  When he called his mother a few hours later he was still blindfolded, handcuffed, and did not know where they had taken him.  The soldiers told Aziz that they were looking for his younger brother Amir and they threatened to shoot Aziz if Amir didn’t turn himself in.

I haven’t seen the boys much after Aziz’s arrest.  Some of them left the city for a few days and others are avoiding the streets.  When I do get a chance to say hello, they are often on edge, constantly looking over their shoulders, aware of any small movement or noise.  Nowhere is safe here, not even their homes.  Abed is trying to finish his final exams.  The soldiers showed up at his house one morning last week and he had to flee over rooftops.  He’s tired of being on the run.  He’s considering turning himself in after school’s out.

Then on Tuesday, May 21 Israeli soldiers were on a manhunt again, this time looking for 12-year-old Tariq whom they surrounded and forced into the base at Bab al-Baladiyeh, on the accusation he was preparing to throw stones, despite the community’s objection to this claim.  He has since been jailed and sentenced to 45 days in Ofer prison, with a hefty bail price of 4500 shekels.

These are only four stories of many more arrests and detainments that have happened in al-Khalil over the last month.  The fact that four of the boys from our neighbourhood soccer team have been arrested speaks to the wider systematic violence rampant across occupied Palestine.  Even something as simple as playing soccer is no longer a game but a struggle for survival where your every move is monitored, scrutinized, and criminalized.

*All names have been changed