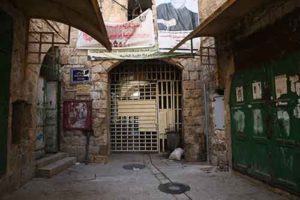 At 10pm on Wednesday, August 9th, the Ibrahimi Mosque checkpoint in occupied al-Khalil (Hebron) was closed. Announcements had been made on the radio the next morning that the closure was due to a Jewish holiday, and that the Mosque itself has been closed entirely to both Palestinians and non-Jews alike. Additionally, the call to prayer from Ibrahimi Mosque was prohibited during that time. While both the Mosque and the checkpoint re-opened for Friday prayers, this is undoubtedly an infringement upon the right for Muslim Palestinians to practice their religion.

Closure of this checkpoint, which leads from the souq (Palestinian market) to neighbourhoods surrounding the Mosque, caused several shops closest to it to close earlier than expected. Further, Palestinian residents were unable to access the market unless they took a 20-30-minute detour up a steep hill which caused delays to work.

Due to the increased number of settlers in the area at that time, most Palestinians didn’t risk going out – or simply weren’t allowed to leave their homes by Israeli Occupation Forces (IOF). This has placed them under a virtual curfew.

Pictured here: The closed checkpoint and the surrounding shops closed for the day.