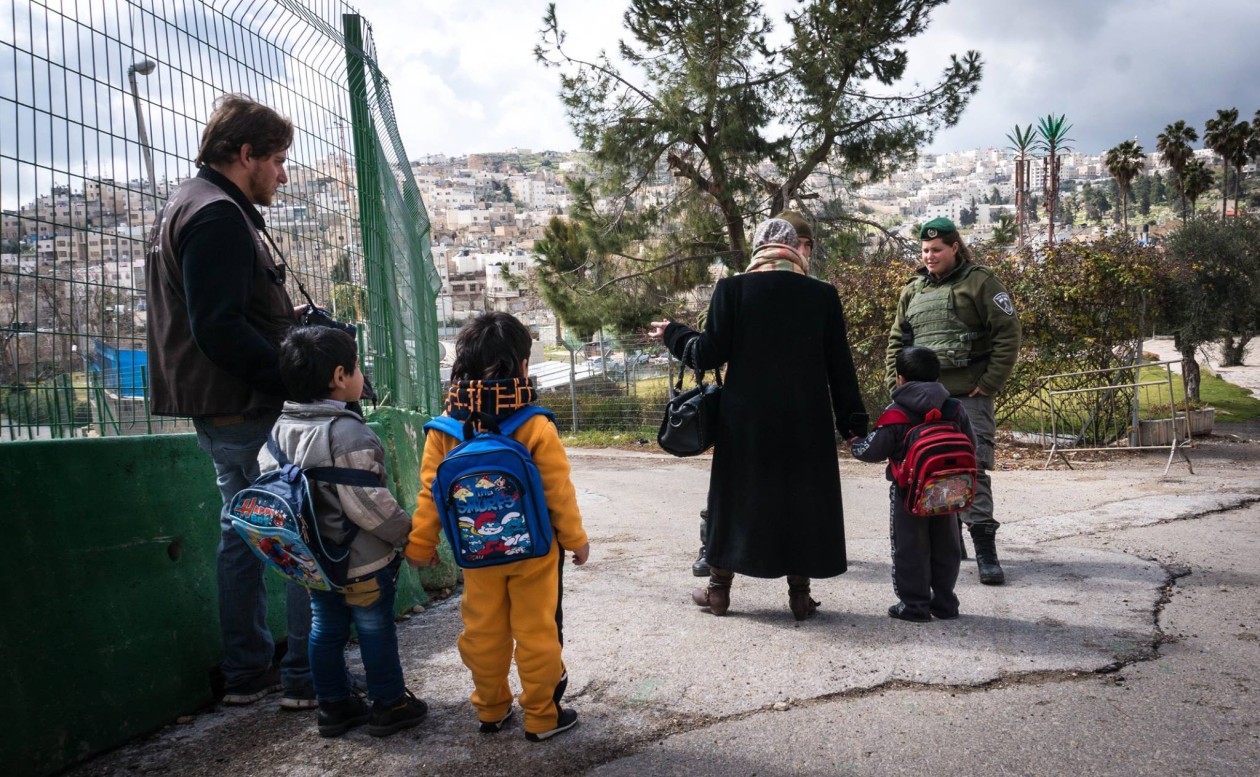 The Red Crescent Kindergarten School is fully equipped for the four-year-old children who will begin their education: carpeted floors, multiple rooms for playing and learning, as well as all the supplies needed to teach and entertain children. Most importantly, the school has caring teachers dedicated to their young pupils.

The kindergarten once had 10 teachers and 90 students, but now only has 3 teachers and 15 students. The school is in a particularly vulnerable location: immediately adjacent to the Ibrahimi Mosque and the Tomb of the Patriarchs, which is guarded by Israeli Border Police. Due to constant soldier and settler harassment, parents in the nearby neighbourhoods are hesitant to send their children to the school. In response to the harassment and the effect it has had on the school children, the principal of the Red Crescent Kindergarten asked CPT to begin escorting the children to and from school.

One form of structural violence that the four-year-olds must face on their way to school is a divided path by the Ibrahimi Mosque. A tall fence divides the path into two parts: a wide, paved path for Israeli settlers, and a narrow, rocky path for Palestinians. Israeli Border Police have recently begun to deny these kindergarten students the right to walk on the “settler path.”

On 18 February, while CPTers were escorting the children to school, Israeli forces stated that the children could not walk on the paved “settler” path. When CPTers challenged the new rule, the border police responded, “I don’t make the rules”. The children were forced to walk up the path littered with broken garbage and rubble in order to reach their school. This same struggle took place on the afternoon walk back home.

The Principal from the kindergarten came down and talked with the Border Police about their new decision. She demanded that students be allowed to walk on the side of the fence that is safer and not covered with garbage and sharp rocks. The arbitrary nature of the Border Police’s segregation rule was made clear when, the following day, the children were allowed to walk to and from school on the paved path.

The strength and dignity of both the children and teachers is evident in the classroom and while confronting Israeli Border Police. The children have the innocence and trust that only young children can have; they have quickly warmed up to the CPTers and hold their hands while walking. The teachers are steadfast in their commitment to their students and in fighting the injustice of having to walking on a segregated path.

Kindergarten children are forced to walked on the unpaved side of segregated street by the Sanctuary of the Patriarchs (Ibrahimi Mosque). Israeli authorities don’t allow Palestinians or even Muslims from anywhere else to walked by the area of the sanctuary they reserved for Jewish worshipers. A photo posted by Christian Peacemaker Teams (@cpt.palestine) on Feb 18, 2015 at 9:16am PST

CPT stands with these children and teachers who should not have to fight and struggle for their right to education.