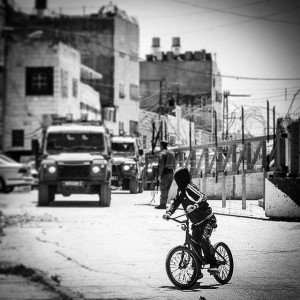 On April 25, Israeli Border Police shot and killed Assad al-Salayma, a 20-year-old Palestinian man, just outside the Ibrahimi Mosque in Hebron in the occupied West Bank. Soldiers said that Assad attacked them with a knife.

On April 12, Baltimore police chased down Freddie Gray after he made eye contact with an officer and ran. Officers claim they found a switchblade on him before they assaulted him and dragged him into police van. Somewhere on that van ride, his spine was nearly severed. Freddie died a week later.

Police officers in Baltimore have been accused of exploiting the subjectivity security assessment: If the police officer believes that person is carrying an illegal handgun, they are then able to engage in a wide range of interrogation practices that have been challenged as unconstitutional. The result is an incredible abuse of police power. Since January 2011, the city of Baltimore has paid out $5.7 million in settlements and court judgements relating to false arrests, false imprisonment and excessive force. “Virtually all the people who won large awards were cleared from criminal charges.”

The Israeli military routinely classify the daily routines of Palestinians as a security threat. Every day in the Old City of Hebron, members of Christian Peacemaker Teams observe Israeli soldiers and Border Police stop and ID check young Palestinian men.  When CPTers question military forces on the nature of the detention, responses range from “Because I can” to “I am just doing my job” – cogent responses describing the assessment of the security risk never arise. I personally once waited for two and a half hours for soldiers to release two young men, who were held just because one of the men didn’t have his ID on him at the time.

On April 2, Israeli soldiers arrested Kamal Saleh Al-Batsh after he was unable to spread his legs far enough apart when they frisked him. He cannot spread his legs far enough apart because he has steel inserts in his legs from being shot by soldiers when he was younger. Later accused of attacking Israeli soldiers, his case was dismissed because of CPT video evidence to the contrary – a rare occurence. 99.74 percent of cases heard by the Israeli military courts in the territories end in a conviction.

The Baltimore police abused  people of all ages: “Victims include a 15-year-old boy riding a dirt bike, a 26-year-old pregnant accountant who had witnessed a beating, a 50-year-old woman selling church raffle tickets, a 65-year-old church deacon rolling a cigarette and an 87-year-old grandmother aiding her wounded grandson. Those cases detail a frightful human toll. Officers have battered dozens of residents who suffered broken bones — jaws, noses, arms, legs, ankles — head trauma, organ failure, and even death, coming during questionable arrests. Some residents were beaten while handcuffed; others were thrown to the pavement.”

“The forms of torture and ill treatment employed against Palestinian prisoners include the following: beatings, tying prisoners in “stress positions”, interrogation sessions that last up to 12 consecutive hours, depriving prisoners of sleep and other sensory deprivation, isolation and solitary confinement, and threats against the lives of their relatives. In past instances, detainees have died while in custody as a result of torture. Confessions extracted through such practices are admissible in court. Israel defends its interrogation techniques as a legitimate way of combating terrorism faced by its citizens, but in reality, these practices are in direct contravention of international law, including the United Nations Convention against Torture (CAT), ratified by Israel on 3 October 1991, which requires any State Party to prevent the use of torture and associated practices.[4] The prohibition is absolute and non-derogable, and allows for “no exceptional circumstances whatsoever.”[5]”

The Palestinian Prisoners Club recently reported that Israeli authorities sexually abuse 40% of Palestinian children detained in Jerusalem, and nearly all are tortured in some way.

Within the Old City of Hebron, there are a dozen military checkpoints within a couple square miles, each with several security cameras. The IDF also uses drones to spy on Palestinians in the city.

Just a few weeks ago, the Baltimore Police Department testified that it has used the secretive Hailstorm cellphone surveillance equipment “about 4,300 times since 2007,” and that it is under orders from the US government to withhold information about surveillance from the public and the courts.

Since 1962, the United States has given Israel nearly $100 billion in military aid, oftentimes sold to the U.S. public as “combating terrorism.”

In exchange, in the last ten years, US police departments from Baltimore to St. Louis have received “anti-terror” training in Israel.

The parallels continue. Israeli Military Order 101 prohibits gatherings of more than 10 people in the West Bank unless the Israeli military gives prior approval. Enforced since 1967, this order denies many basic freedoms required under the UN Universal Declaration of Human Rights.

After protests grew more violent on Monday, Baltimore mayor Stephanie Rawlings-Blake announced a curfew in Baltimore from 10pm to 5am for a week, and Governor Larry Hogan called in the US National Guard. This is the second time in six months that the US has deployed the National Guard to put down protests against police violence.

At least once a week, Palestinian schoolchildren passing through checkpoints on their way to school throw stones at the checkpoint. While these stones do not pose a threat to the lives of Israeli Border Police, the Border Police frequently respond with teargas, stun grenades, and sometimes rubber bullets.  Israeli soldiers tell us that they are protecting themselves from dangerous people. Recent protests against the killing of Assad al-Salayma have been met by Israeli teargas. – again, targeting mostly adolescent, not terrorist elements. Last summer, Hamas’ violence and protests in the West Bank were called “terrorism” by Israeli politicians, while Israeli murdered over 448 children in Gaza. – despite the fact that Hamas rockets posed little threat to Israel.

The Baltimore mayor and others have denounced protestors engaging in property destruction or throwing rocks at the police, calling them “thugs.” In a deal brokered by the Nation of Islam, the Bloods and the Crips have made a truce to march together and demand justice. The Baltimore Police immediately claimed the gangs are uniting to attack police.

The comparisons are easy between Baltimore and Hebron and the reality is devastating. Israeli forces occupying Palestine use daily violence to destroy Palestinian lives, but any Palestinian retaliation is labeled terrorism. In the United States, police use violence every day and never get called “thugs.” In each case, we remain willfully ignorant of the true origin of violence. We do not hold everyone equally accountable.