Yom Kippur, the Day of Atonement, the time to consider the sins of the previous year and repent, is celebrated by the Jewish settlers in Hebron by increased oppression of the Palestinian population of the Old City. There are more stringent movement restrictions and security precautions imposed on the Palestinians by the Israeli military. Jewish Liberation Theologian and retired Director and Professor of Jewish Studies at Baylor University, Marc Ellis, names the contradiction well in his blog of 23 September:

“Our expertise in oppression. Celebrated. By omission. During Yom Kippur. Ethnic cleansing. Ghettoization. Murder. By the thousands. How good we are. In the global arms trade. Testing our weapons on defenseless civilians. As we demonize those struggling to be free. Our aspirations. Fulfilled. So what if others have to suffer. We are the Chosen Ones. Who are they. To us?”

This was evidenced clearly on 22 September at an Israeli military checkpoint controlling Palestinian pedestrian travel near Israeli colonies in Hebron which are illegal under International law. Israeli soldiers shot and mortally wounded 18-year-old Hadeel Hashlamoun, a first year university student, after they stopped her at the checkpoint. Amnesty International reports that evidence indicates that the killing was an extrajudicial execution. An excerpt from their statement:

“Pictures of the stand-off that led to her death and accounts by eyewitnesses interviewed by Amnesty International show that she at no time posed a sufficient threat to the soldiers to make their use of deliberate lethal force permissible.”

Thousands attended her funeral the next day, including members of the Christian Peacemaker Teams. As was expected, after the funeral, there was a clash at the checkpoint where she was killed – Palestinian youth throwing rocks and Israeli soldiers responding with dozens and dozens of sound bombs and teargas grenades from in front of the checkpoint and the nearby rooftops.

But this was also the preparation day for the Muslim celebration of Eid al-Adha, the 3 day festival after the Hajj, the annual pilgrimage to the Holy City of Mecca – also called the feast of Sacrifice honoring Abraham’s willingness to sacrifice his son in obedience to Allah. The Hebron market area beyond the embattled checkpoint was jammed with shoppers and street merchants.

When the Israeli soldiers decided to clear the market area, moving into the crowd with their teargas and sound bombs backed up by the “skunk-water” truck ready to hose down the area, the crowd, instead of dispersing, surrounded the soldiers. It was the merchants and shopkeepers who demanded that the soldiers retreat. Armed with sticks they took charge of the stone-throwing youth while the soldiers wisely retreated to the checkpoint. A stand-off this time resolved without lethal violence. Maybe there is hope.

Another sign of hope, this time in Chicago. Rabbi Brant Rosen at Tzedek Chicago led his congregation in a Yom Kippur “Confession of Complicity.” The service began with confessing the complicity in US issues: militarism, demonizing immigrants, racist ideologies, incarceration of people of color, etc., but ended with confession of complicity in Israel’s sins:

• For the destruction of homes, expropriation of land and warehousing of humanity
• For blockading 1.8 million Gazans inside an open air prison
• For repeatedly unleashing devastating military firepower on a population trapped in a tiny strip of land
• For wedding sacred Jewish spiritual tradition to political nationalism and militarism
• For rationalizing away Israel’s oppression of the Palestinian people
. . . for all of these, Source of Forgiveness, forgive us, pardon us, receive our atonement.

“[T]he confession itself provides Jews with a choice . . . in conscience, can he – can we – remain silent?”

It is often the prophets in exile that can name the sins to which the people themselves remain willfully blind.

True Yom Kippur repentance for oppressing the Palestinian people, and recognition that God does not condone the sacrifice of Abraham’s other children, are prerequisites for the pilgrimage (Hajj) to Peace in the Holy Land. 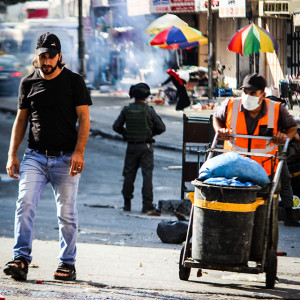