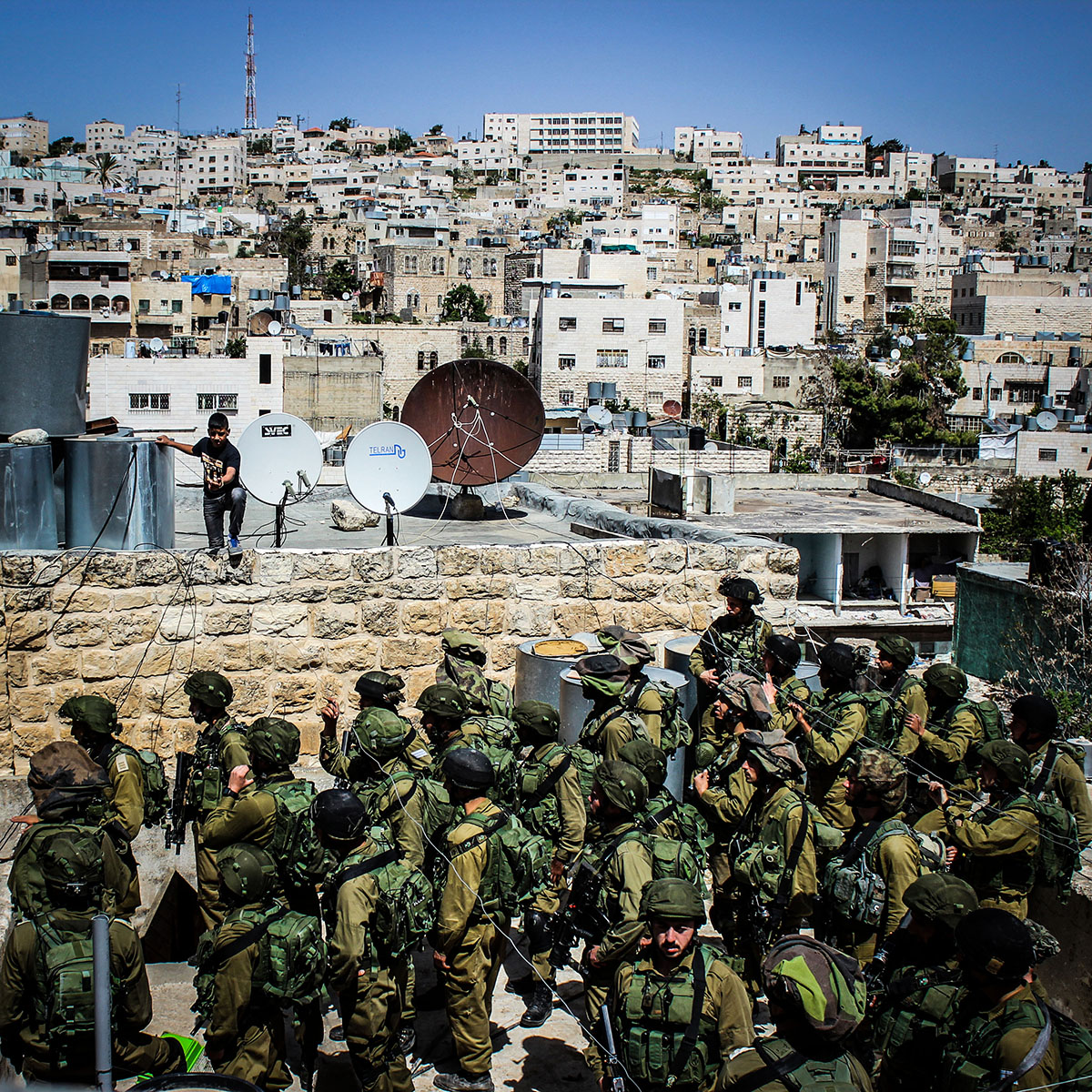 At fourteen, school, friends, the storms of puberty and concurrent parental boundaries should be at the forefront of the mind. Yet the Palestinian teenagers of H2 Hebron also have the daily harassment and intimidation of military occupation to contend with. Looking back at the week of Maher – a fourteen year old Palestinian boy – provides a glimpse into the extent to which military intimidation and harassment characterise daily life for teenagers here.

It’s Saturday 4th April and a group of Israeli soldiers storm Maher’s house, claiming that Maher has been seen ‘stone-throwing’- the Israeli military’s go-to rationale for harassing Palestinian children and their families*. Maher is taken from his home, despite the protestations of his father. Rather than heeding Maher’s father’s defence of his son, the soldiers see fit to also take Mahmoud – Maher’s father – into custody as well. The father and son are released from the police station later in the evening.

Two days pass, and at approximately 18:45 on 6th April soldiers once again raid Maher’s home. This time, however, Maher is spared from being taken into custody. Yet later this evening, Maher is walking and is once again detained by a group of fully armed soldiers. Although another boy, known to Maher, turns himself in for stone throwing, the soldiers continue to threaten Maher with arrest, stating that they will again take him to the police station. As CPTers attempt to document Maher’s detention, soldiers make a game out of requiring the CPTers to recite their ID and passport numbers. Just as the soldiers are about to take Maher into the illegal settlement of Beit Romano, and into the military base, Maher’s father arrives, and is forced to plead for his release once again. Eventually Maher is allowed to continue his journey back home. See this video for CPT’s documenting of this incident.

This does not signal the end of the military targeting of Maher and his family. The following day Maher’s family is once again subjected to a house raid by Israeli soldiers – this time, however, there are forty-eight of them. In keeping with so much of the soldier’s activity we witness in Hebron, this incident is preceded with a clear show of force to all the Palestinian residents of Hebron’s Old City. The crowd of soldiers parade the streets in a loop, ID checking and entering homes along the way, before finally returning to Maher’s home again. See more photos here.

Forty eight soldier’s heavy military boots pound on the stairs through Maher’s home up onto the roof. CPTers are permitted by Maher’s neighbour to enter their roof, where we witness this crowd of soldiers laughing, joking and taking a series of group photos. Maher sits on a ledge on a higher section of the roof, watching this absurd spectacle. While his mother and younger sisters also watch, Maher’s father once again has to defend his family from further military assault.

The soldiers explain to Maher’s father that their reasoning for choosing his family home as the opportune spot for a group photo is once again because of Maher’s alleged ‘stone throwing’. Maher’s father explains that the reason why Maher has been on the roof – the ‘evidence’ of his ‘stone throwing’ – is to tend to the chickens who live in a coop there. After spending more time, seemingly doing little more than just ‘relaxing’ in the sun atop Maher’s home, this group of soldiers begin to pick up items, including glass bottles, and large rocks, and hurl them from the roof, onto a lower section of the home.

The location of Maher’s home is significant, and highlights one of the disturbing reasons for the targeting of this family. Maher’s home is next to the illegal Israeli settlement of Beit Hadassah, which is adjacent to, and on top of, a Palestinian residential and commercial area. The entrance to Beit Hadassah is on Shuhada Street, also termed ‘Apartheid Street’, where Palestinians are restricted from walking by Israeli forces. This restriction applies to most of the street, apart from on a small section of road where an old Palestinian woman’s home was recently welded shut by Israeli forces – a home which is also very close to the Beit Hadassah settlement.

Heightened military repression against the families– such as Maher’s family – located near close to the growing illegal settlements within West Bank, characterises Israel’s occupation of Palestinian land, homes and lives. This indicates that allegations of ‘stone-throwing’, the ‘need’ for actions such as group photos of soldiers atop a family home, or the welding shut of an old woman’s home for ‘security reasons’, simply provide a smoke screen: a smoke screen for targeted harassment and intimidation as a bid to expel families such as Maher’s from their home, thereby ‘sterilising’ areas surrounding illegal Israeli settlements from Palestinians.

One thing is for sure, who has the power in a given moment is never a simple thing. The image of Maher at the top of this article standing above the forty eight soldiers as they laugh, joke and photograph each other on his family home is a powerful image of ‘sumud’ – steadfastness through remaining on the land. Despite, seemingly, the full weight of military occupation stacked on top of him this week, this fourteen year old boy, in this moment, has so much power, in simply being, in simply remaining in his home, in one of the most contested spaces of Palestine.

*CPT does not dispute that stone-throwing occurs in Hebron, yet we assert that Israeli forces ‘response’ to this is often disproportionate. Years of frustration, violation, and the absence of safe places to play, lead some to pick up a stone and throw it at the towering checkpoints and military towers that litter the city. Often this poses no threat to the Israeli soldiers and Border Police within metal containers and on rooftops, who frequently respond by deploying tear gas and stun grenades. Furthermore, allegations of ‘stone-throwing’, with no solid evidence – rather, claims of a child having been ‘seen’, or having dusty hands – are frequent ‘justifications’ for child detainment and arrest.

On 13.04.15 CPT visited Maher’s family. His father, Mahmoud, informed CPT that this week Israeli soldiers (at times as many as 16, and once, 48, discussed above) have been entering his family home every day, every three hours. He explained that sometimes it is just his wife at home, subjected to these constant home invasions. He also informed CPT that last year, many of his family’s possessions were destroyed by soldiers during such a house raid.