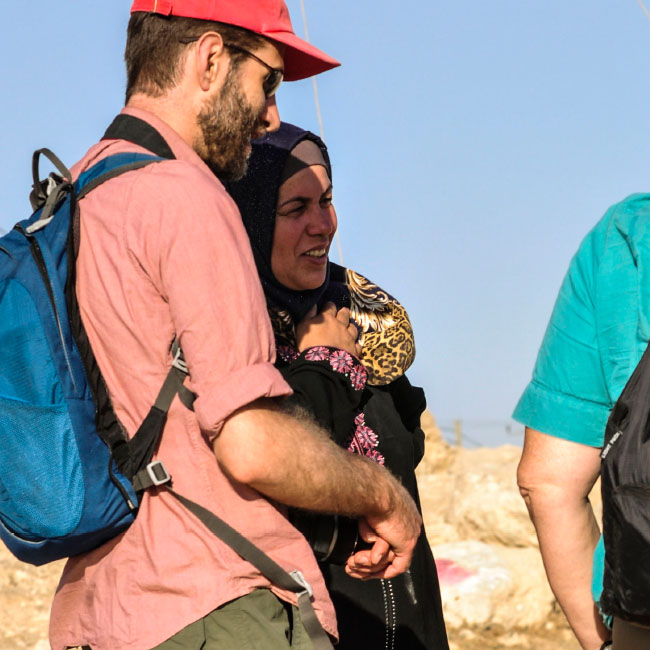 Reflection from an interfaith delegation: A group of U.S. American Jews and Christians traveled together for a CPT delegation in Palestine. Here you’ll find the experience of one Jewish participant, and how it felt to navigate the complexities of being one of the very few non-settler, non-military Jews in Palestine.

In the course of the months of preparation for the interfaith delegation to Palestine, Jews and Christians from Philadelphia began to get to know each other, talk about the itinerary, and meet with CPT staffer John Bergen, who described his experience on the ground. But there was one thing we didn’t know. On the streets of Hebron, we wouldn’t be out as Jewish.

Soon after we arrived, a team member told one of my fellow delegates to remove his kippa and his Jewish star earing. Sometimes, such as when we entered the Ibrahimi Mosque, the reasons were clear, as Jews were not permitted there. Other times our identities were acknowledged. When we met with Palestinian activists, our leader found a way to tell them that we were a group of American Christians and Jews. But as I walked through the Old City, I couldn’t help but feel a sense of “passing” that felt at cross-purposes with my hopes when I joined an interfaith delegation.

Settlers are walking through 56 checkpoint to H1 area which is under Palestinian Athourties visiting what they call Havron tomb, closing all the shops in Bier Al Sabaa’a St. And stopping. Palestinians (9 men, 2 women and 3 boys) while they are passing to go to their houses.A photo posted by Christian Peacemaker Teams (@cpt.palestine) on Jul 26, 2015 at 9:38am PDT

There may well be good reasons for these policies. It’s clear that in Hebron, every man in a kippa is assumed to be a settler, and complicating that perception may be laudatory, but it also complicates the work of the CPT. As delegates, we’re here to do what’s needed to be done, to join the staff as they monitor the situation, and keep track of the many ways the settlers and the IDF make life impossible for Palestinians in Hebron. Certainly, as an American Jew, I feel compelled to confront the damage caused by Americans in general and American Jews in particular. Yet part of what drew me to join the delegation was, in fact, the possibility of representing a Jew who was neither a settler nor a soldier, and bringing my own history and identity to this work.

Yet here, that identity was less something I brought than something I carried. I kept wanting some signal—a new red hat that said “Jew in CPT”, an earring shaped like a Jewish star—but in the context of constant urgent issues, these points felt trivial. I know delegates who come to Hebron cry a lot, and that held true for me. Yet some of my own reasons might be a little different. What does it mean to enter the Ibrahimi Mosque on the Saturday tour of settler encroachment on the Old City, and hear familiar Shabbat chants from the synagogue side? Settlers are praying, and I don’t share their ideology, but I share those words and melodies. I don’t think of myself as religious, but suddenly felt a fierce need for a place where I could pray. What does it mean to know that Jews had lived in Hebron beside their Muslim neighbors for generations?

Heavy Israeli military presence escorting the settler tour this morning in the Old CityA photo posted by Christian Peacemaker Teams (@cpt.palestine) on Jul 11, 2015 at 1:18am PDT

I’d been doing some reading about the history of Muslims and Jews in Hebron where they lived as fellow Arabs under the Ottomans, sharing festivals and pilgrimages, tutoring each other’s children, catering each other’s weddings. By the time of the British Mandate, the rise of Zionism and Arab Nationalism caused tensions that led to clashes throughout Palestine, and in 1929, a rumor from Jerusalem led to a massacre of Hebron’s Jews. Yes, many of Hebron’s Muslim families shielded them and saved their lives, or helped them escape. Yet the truth of the matter is that after that year, there was no Jewish community in Hebron, and in spite of an attempt to repopulate the quarter a few years later, it could never really return.
This is the great theme of the “settler tour” we observed today, the obscene circus that shuts down several streets in the Old City. Today, around forty orthodox settlers took what I suppose was their traditional afternoon Sabbath walk as IDF soldiers invade Palestinian homes to stand guard on rooftops, cars are stalled, shops are shuttered tight. I assume that the settlers walk up a street and through a series of tunnels and courtyards and point out sites from the massacre. I can’t know. I was back with CPT and the rest of the international observers, as Palestinian boys yelled and played rambunctiously with their bikes and asked us to take their pictures. All the while, what I really wanted to know was this: What was Hebron’s Jewish Quarter? What was life like there? Where was the butcher-shop or mikveh or synagogue? Frankly, I want the massacre acknowledged, but it can’t teach us anything useful. Here’s what can: the years when Jews lived in Hebron not as settlers but as neighbors.
Settler life in Hebron isn’t Jewish life in Hebron. Settlers are idol-worshippers; their idol is Land. I know there must be some Israeli groups who work in and around Hebron and partner with CPT, Jews who are neither soldiers nor settlers. I hope that when the next interfaith delegation comes here, we get to meet them, representatives from groups like B’tselem or Israeli Coalition Against House Demolitions. I hope we even find a way to pray together.
Finally, thanks to a CPT reservist, I got a chance to look at the settler’s brochure that describes their own tour of the Jewish Quarter. It pointed out a synagogue, a home for the elderly, and a clinic, and it made me wish for something fiercely: to see those things with people who aren’t settlers. Let’s find a way to walk through the Old City with guides who talk about every variety of demolition and displacement, and also every variety of intimacy and shared celebration. They should tell these stories in Hebrew, English and Arabic. I wonder what would happen.