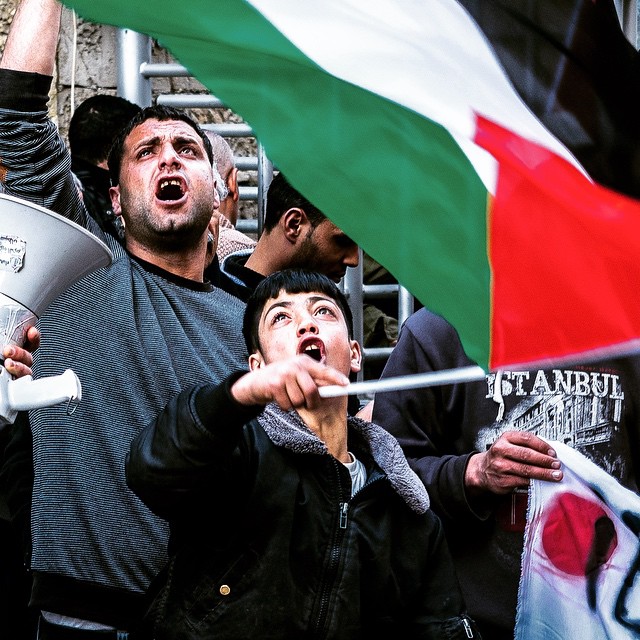 A young Palestinian boy waves the flag of Palestine outside of Check Point 56, one of the road closures that ensures Jewish exclusivity down Shuhadah Street in Hebron.

HEBRON, Palestine – Last Monday, Israeli President Reuven Rivlin visited Hebron. As a supporter of the rights of the Palestinian citizens of Israel, President Rivlin could have used this opportunity to speak out for the rights of Palestinians living under occupation in Hebron. Instead, he visited the Ibrahimi Mosque (site of the 1994 massacre by radical Zionist Baruch Goldstein), travelled down Shuhada Street (closed to Palestinians since that massacre), and finished his tour at Beit Hadassah (an illegal settlement established within the city in 1979). During the visit, Rivlin praised the work of the illegal settlements.

Because Rivlin’s visit would mean greater numbers of military and Border Police, as well as an increased chance of settler violence, CPT agreed to help monitor the situation. Members of CPT spent the day on the roof of the CPT apartment, in part to monitor settlers and Israeli soldiers walking down Shuhada Street, and in part to prevent soldiers from taking over the roof for “security reasons.” CPTers also provided protective presence outside the Ibrahimi Mosque and accompanied Palestinian activists protesting near Shuhada Street.

Israeli Defence Forces and Border Police took over the roof of a family’s house near Beit Hadassah, and told the family that if they left the house, soldiers would shoot them with sound grenades. A young Palestinian shopkeeper and friend of CPT, Ghassan was arrested after police harassed him, told him to close his shop, and knocked his keffiyehs onto the ground. Local Palestinian organization Youth Against Settlements organized a demonstration at military checkpoint 56, which closes off the Bab il-Zawiyya commercial district from the once-vibrant Shuhada Street. Community members held signs protesting the closure of Shuhada Street and calling for Rivlin to be taken before the International Criminal Court. Demonstrators hung Palestinian flags on the fence around the checkpoint and chanted for an end to the military occupation. In response to this nonviolent protest, Israeli forces began firing sound bombs into the crowd, directly hitting a couple of demonstrators. Some members of the Israeli military specifically aimed their weapons at CPTers and their cameras. Israeli forces continued to fire sound bombs and teargas canisters as they pushed the activists and press farther away from the checkpoint and occupied more of the street.

Israeli soldiers demanded access to the Shadi family’s home and occupied their roof during the visit of Israeli President Rivlin yesterday. The family told us they were threatened with sound bombs if they went outside. The Shadi family live surrounded by the Beit Hadassa settlement in Hebron, which the Israeli President controversially visited. While the family were forced inside, we sat with the young children looking out the lounge window to the festivities below. #Colonialism #Israelisettlement #israelioccupation #freepalestine #peace #love #apartheid #israel #occupation #nonviolentresistance #oppression #Palestine #Hebron #الخليل #المقاومة #فلسطين #الاحتلال #שלום #אהבה #צדק #ירושלים #חברון #פלסטין #الحرية   A photo posted by Christian Peacemaker Teams (@cpt.palestine) on Feb 3, 2015 at 9:03am PST

Our neighbor and friend Zleikha, a fierce activist, has a balcony that looks out onto Shuhada Street. She hung several signs from her balcony and one from her roof, proclaiming “Let Palestine Be Free.” After Rivlin’s visit, members of the Israeli anti-occupation NGO Breaking The Silence stopped on Shuhada Street and had Zaleeka share her opinions of Rivlin’s visit. Later in the day, IDF soldiers came to our apartment to take down Zleikha’s signs and use the CPT roof for surveillance. After a short discussion with two CPTers about CPT’s commitment to nonviolence, the soldiers left.

We are thankful for the Palestinians and Israelis who protested President Rivlin’s visit with acts of courageous nonviolent resistance. We are saddened and outraged that President Rivlin claims to support equal rights for citizens of Israel, but actively supports illegal Israeli settlements and the military occupation of Hebron.