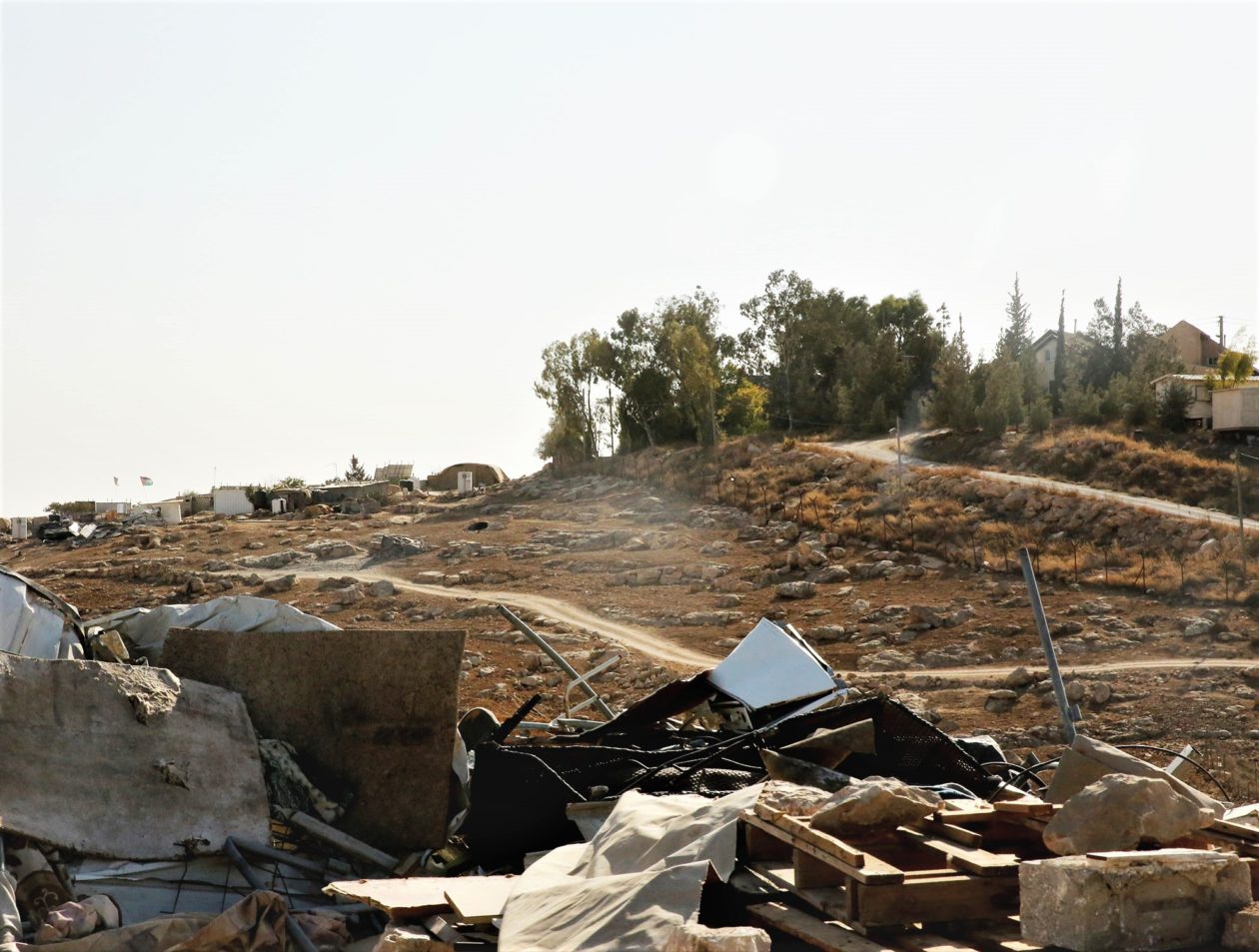 The rest of a demolished house in Um Al-Khair. To the right side is Karmel settlement.

Um Al-Khair is one of the thirty villages in the South Hebron Hills (known as Masafer Yatta), which is located in Area C of the occupied West Bank of Palestine. Area C covers sixty percent of the West Bank and it is totally under the Israeli military and civilian control.

One of many illegal settlements, Karmel, was build on a big part of Um Al-Khair’s land and its demolished houses. The Palestinians who live there are always suffering from racist Israeli policies, military force and settler violence. The Israeli occupation’s aim from these practices is to join the village’s land to Karmel settlement.

Palestinians are not allowed to build on their lands before receiving permission from the Israeli Government. Although they are living in tents and huts, Israeli authorities have issued demolition orders for Umm Al-Khair, saying these tents were built without permits. So all of the community’s structures, including tents, crops and pasture land are threatened by demolition orders. More than 94 percent of the building permits that the Palestinians apply for are rejected by the Israeli authorities.

The Israeli military authorities prevent Um Al-Khair community from having services like water, electricity and health care. The locals’ income depends on breeding sheep or going to work in another village. In the winter the tents are very cold and the opposite in the summer.

Some Palestinians have applied to get permits from Israel more than 25 years ago, and live in their small tents waiting for either a permit to build a house or a demolition order for their simple tents. However, all settlers in the illegal Karmel settlement have good houses, water, electricity and  multiple other services denied their immediate Palestinian neighbours.

There are a number of nonviolent organizations present in the South Hebron Hills. Some have projects to there in order to accompany the schoolchildren and the locals in their daily life’s duties. Other organizations and movements are working mainly against house demolitions, and to document the settlers’ violence in South Hebron Hills like ICAHD, Operation Dove, EAPPI. According to the testimony of the people living there, the presence of these organizations is making a big difference in how the settlers and soldiers act since there is an international camera and eye capturing and showing the whole world what is happening. Palestinians need solidarity,  especially those who live in areas close to settlements like Um Al-Khair and the rest of South Hebron Hills villages. For locals, seeing a non-local person coming to hear their voices and spread it all around the world is giving them hope that someday someone from outside will listen to their call.

Some of  the people in Masafer Yatta even hope that they will receive a master plan for their communities from the Israeli Civil Administration, which will save their way of life from demolition and allow for the Palestinians to build better houses.