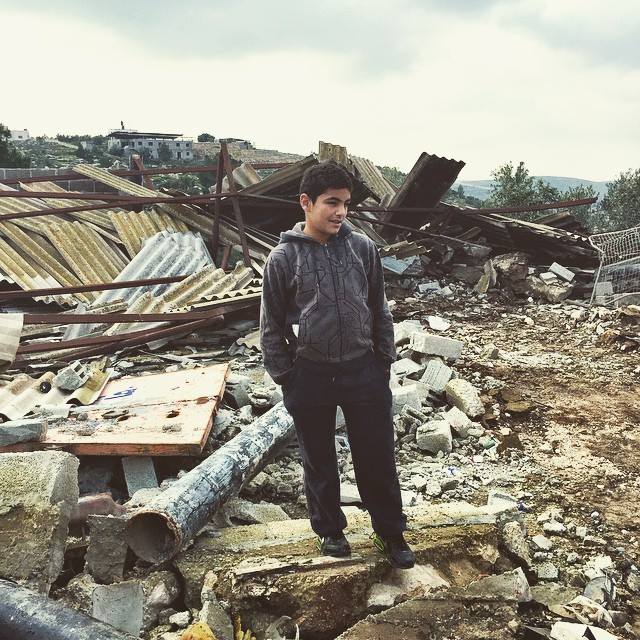 Last week Christian Peacemaker Team members drove out of Hebron with our Palestinian partner organizations the Land Research Centre and Al-Haq. Our purpose of driving through the rocky hills with their terraced farms was to see the results of more Israeli demolitions that happened just before the recent big storm.   While our destination was only thirteen  kilometres as the crow flies – it was much longer, because we needed to navigate around the complex settler road system, and of course Palestinians aren’t allowed on them all.

We arrived in the town of Idhna, a village that that has existed since the Bronze Age. The Green Line (1949 armistice line) lies just a kilometre away, and from the village you can see the Israeli ‘security fence’ cutting across the Palestinian farmland.

Idhna is a village has grown tenfold in the last 60 years. While the original village is in the area designated as Area B in the Oslo accords (civil Palestinian authority), twenty years later, the village now stretches into Area C (full Israeli control). Israel has no desire for this village to expand and so almost every home on the outskirts of town has an Israeli demolition order upon it (as well as a school). As I looked over the new buildings that had clearly been built with the savings, hopes and dreams of any new home, I wondered how people continued to hope when any day their home could be demolished.

It was in the outskirts of Idhna that we met with Mohammed Tamezeh, whose older home was surrounded by the new homes of his daughter and nephews. When we asked how many people were in his family, he said sixty-six without blinking – it took us a while to let him know we meant just the people living in his house – which turned out to be him and his wife and their three youngest children.

Fifteen years ago Mr. Tamezeh built a sophisticated tin and brick animal shelter, which was four metres high and equipped with electricity and a day lounge for people looking after the sheep. Over the years he had built up a flock of 120 milking sheep, many of which are currently pregnant.

Four and a half years ago Mr. Tamezeh received a stop work order on his shelter by the Israeli Civil Administration. This order is the first step in the legal process for Israel to demolish a building. The second stage is a demolition order, which thankfully never came. However, just before the end of December Mr. Tamezeh received a notice indicating that Israel would be demolishing the structure, and giving him three days to appeal. Mr. Tamezeh wasn’t able to launch the official appeal in that time.

Two weeks later, a convoy of jeeps arrived on his property –Israeli military jeeps, border police jeeps and the Israeli Civil Administration with demolition equipment. As soon as Mr. Tamezeh was able to clear his sheep out of the shelter, the Israeli military completely demolished it, flattening feed trays and medicine inside the shelter. Mr. Tamezeh said they were going to also destroy his portable water tank, but he lay on top of it, and the Israeli authorities didn’t insist. He was grateful that none of his pregnant sheep died in the snow, as he was able to put them in a shed on his daughter’s property. The remainder of the sheep thankfully survived the snow in an open field. Milking the sheep is much more difficult in the cold weather now that his working facility has been demolished. It is difficult to give any rationale for what Israel actually achieved by this demolition.

Demolitions in the Baqa’a Valley

Just fifteen kilometres from Hebron lies the Israeli settlement of Kiryat Arba, founded in the 1970s on the site of an abandoned military base. This settlement is well within the Green Line (also in Area C) and therefore clearly West Bank land. Under international law it is illegal for Israel to transfer any of its population there, and they are continually condemned by the international community for doing so. Kiryat Arba was founded by Moshe Levinger who says, “that the Land of Israel must be in the hands of the Jewish people—not just by having settlements, but that it’s under Jewish sovereignty”.

The story of Kiryat Arba is also a story of a town that is growing. However the land that it is growing across is Palestinian land. The other place we visited last week was the extended Jaber family who live in the shadow of Kiryat Arba. Their struggle to save the family farm and resist violent settler incursions has been supported for many years by CPT as well as the Israeli Committee Against House Demolitions (Links to CPT and ICAHD stories).

A major highway built for the settlers has cut the family farm in half; they have lost most of their centuries old farm to settlement expansion, and one of the brothers, Atta Jaber has had his home demolished twice.   The house we visited was the home of another brother. The Jaber family used to take groups up to the hill above this home and show people the settlement that was growing towards them. However now they can’t even climb the hill, as the perimeter fence has come right up to the edge of the steep hill. In fact the Kiryat Arba Master Plan has explicit plans to take over most of their land.

We walked through their grapevines to their turnip plantation. This is where we saw the home on their property that had been demolished. The home was a humble two-room farm shack, home to an elderly family member who regularly hosted two of her teenage grandsons when they worked in the turnip field. The woman had gone to visit other family the day her home was demolished, so you could see all her belongings crushed under the concrete slab that served as her walls.   After seeing the demolished home, we went to see an old water cistern, which has been providing water to their farmlands for centuries. The cistern is built with rocks up to ground level, and has a large cavern inside.

In recent times Israel has been accessing (without permission) the Jaber’s family farm through which they have built a massive electricity pylon. The cistern was sustaining damage from the construction trucks driving through their farm. So just two weeks ago, to protect the cistern, the family laid a concrete slab over it. Almost immediately they received a stop work order on the cistern – an indication that Israel is planning to demolish the cistern.

Both Idhna and Kiryat Arba are growing towns. In the case of Idhna, the Palestinians are not allowed to see their village expand naturally as their population grows, even though under International Law, it is on the land that is supposed to become land of the Palestinian State. In the case of Kiryat Arba, Israel has no right to take any more West Bank land, but is deliberately stretching to take over more of the land so it cannot be a Palestinian State.   While the international governments may wax lyrical about a two state solution, it is clear that Israel is working hard against this possibility. Perhaps one can say that urban planning is war by other means?