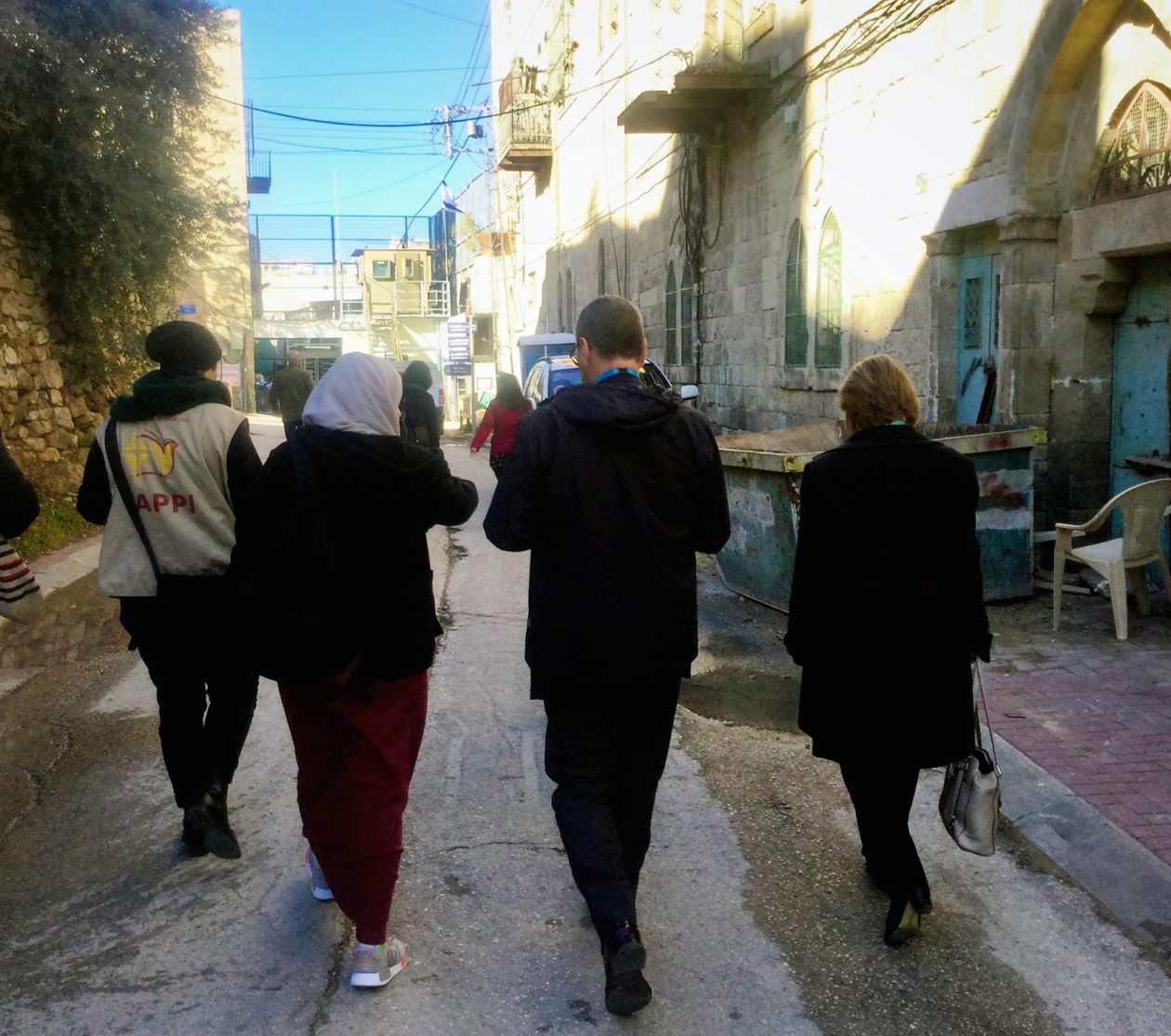 UNICEF group, a member from EAPPI and myself walking in Shuhada Street. Checkpoint 56 appears in the background.

December 21 was a special day for me. I passed through Checkpoint 56 in H2 area of Hebron, without the soldiers stopping me, searching my bag and checking my ID. It is one of the checkpoints that leads to Shuhada Street, which used to be the main artery of Hebron. It’s been  mostly closed to Palestinians since 1994, and the closure became complete after the second Intifada in 2000.

That morning, Geert Cappelaere, who is the UNICEF Regional Director for the Middle East and North Africa, came to visit Qurtoba Basic School and to meet with EAPPI and CPT. Qurtoba School is on the side of Checkpoint 56 where I’m not allowed to be. Only the Palestinians who live on the other side of the checkpoint or who attend or teach at Qurtuba school are allowed to pass through. (The families who remain in spite of soldier and settler harassment are not even allowed to have visitors). As a Palestinian CPTer, I know that soldiers can stop me at any checkpoint, check my ID and search my bag. They might not allow me to pass. If I ask “Why?” they will never mention the actual reason, which is “because you’re a Palestinian woman wearing a long dress and covering your hair.” That’s enough for many Israeli soldiers and border police to see me as a major threat, especially at the checkpoints.

On my way to work I was saying to myself, “Don’t let yourself feel bad if the soldiers prevent you from passing or if they check your ID, search your bag and then deny you entry through the checkpoint with your teammates, EAs and UNICEF group”. I was totally sure that they would be all allowed to pass without me.

My two teammates and I made a plan to make sure I wouldn’t be the last person to pass. We usually work on the ground as a group of two; it’s part of our organization’s policies. But because of the high possibility that I would not be allowed to enter and to make sure that the team could go to the other side of the checkpoint, we went as a group of three CPTers.

When we started to walk toward the turnstile gate, one of my teammates walked in front of me and the other walked behind me. The UNICEF group was in front of us. I saw a soldier staring at me and at that moment I assumed he would tell me to stop, especially when the metal detector started beeping as we walked through.

However, they just said “welcome” to the UNICEF group and walked with them until we arrived at the Checkpoint 55, which is a few meters from Checkpoint 56. They didn’t look at our IDs or passports, which almost never happens at this checkpoint. At that moment, I felt that the checkpoint had disappeared and how easy it is to walk on Shuhada Street. I didn’t want to look back, and I tried to enjoy being there even for a few minutes, but I couldn’t. Seeing the Israeli soldiers’ faces and some settlers walking around gave me mixed feelings. My teammate asked me how I’m feeling and if I’m alright. I don’t remember exactly what I said but I think I said “good”. I tried to focus on my duty.

Before leaving Qurtoba school, some students sang a song of resistance by Ahmad Kaabour (which encourage people to hold on to hope) for the visitors. I saw that the Palestinians in the room were trying to hold back tears and others who didn’t know Arabic looked empathetic, but it was obvious they just didn’t get it.

On our way back, I talked with Mr. Cappelaere about our work in CPT and what CPTers face every day at the checkpoints. I told him a bit about my experience, working with CPT for the last three months. He had a conversation with the soldiers at Checkpoint 55, telling them diplomatically that they should allow the teachers and children to pass the checkpoint easily. He said all children deserve the same right to education just as he and the soldiers had had. He also mentioned that the school principal who had worked there for five years had again been detained in the morning for more than 40 minutes, saying that her name “isn’t on the list” and she isn’t allowed to pass.

While Mr. Cappelaere was talking to them, they tried to say nice words about how they do care about the educational process. I wish he knew they were lying.

After the visit was over, I worked very quietly. When I took a break with my teammates who were with me in the morning, I told them how I felt about the checkpoint disappearing for a moment after I passed, and how I felt about being in a place inside my own city, that normally I’m prevented from being since I’m a Palestinian “monster”, but because I was with UNICEF, I walked down there safely. Only because UNICEF accompanied me, did the Israeli soldiers treat me like a human being; it was such a shitty feeling.

And I know that if I tried to tell my friends about what I experienced, there are two responses, either they will say I’m crazy to try entering the checkpoint since I’m a “threat” in the Israeli soldiers’ and settlers’ eyes, or they will be surprised why I’m upset because we grow up seeing how Israeli soldiers humiliate our people. It’s a known fact that if you are a Palestinian,  you shouldn’t expect to be treated as a human at the checkpoints. 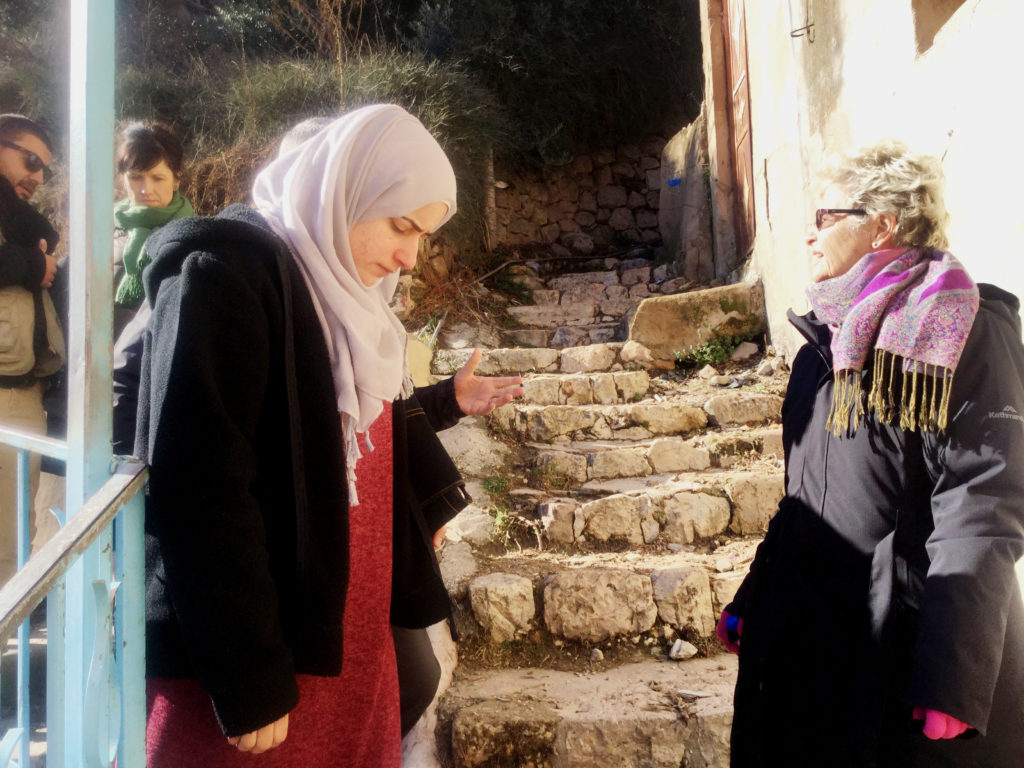 My teammate Carole and I listening to Mr. Cappelaere, who’s standing next to me in the photo on our way back from Qurtoba School.