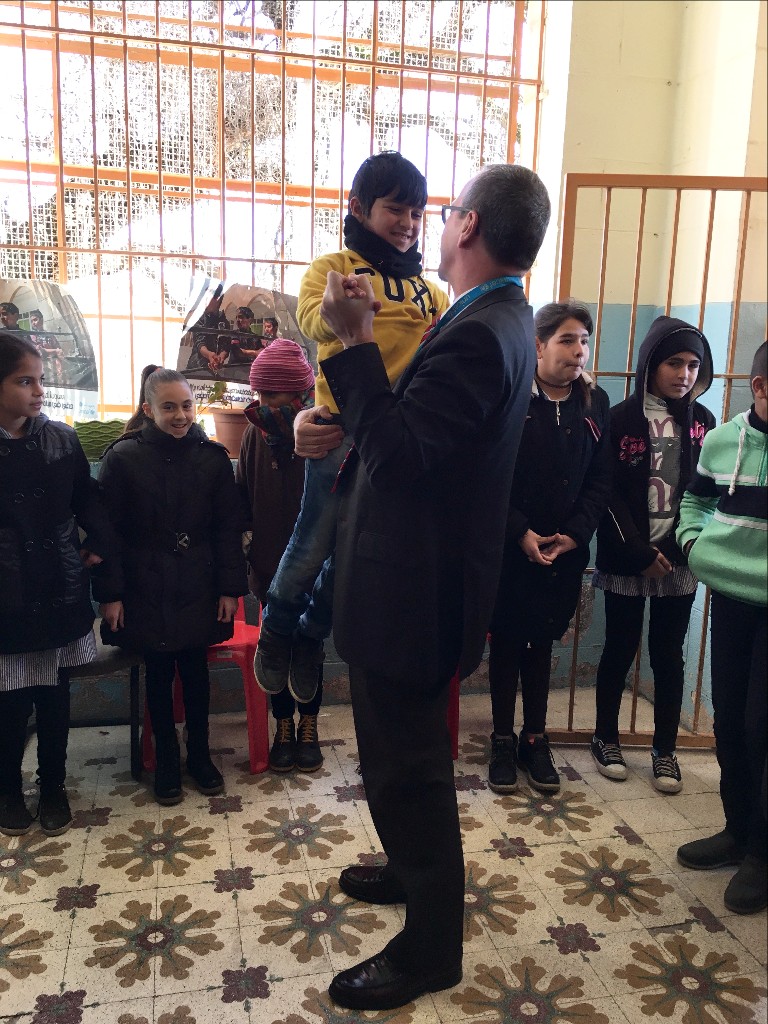 On December 21st the director of UNICEF, Mr. Geert Cappelaere, and six other local staff visited Al Khalil. The purpose of their visit was to visit Qurtuba School on Shuhada St., which runs past Beit Hadassah where some of Hebron’s most violent Israeli ‘settlers’ live. They also arranged to meet the CPT Palestine team, which monitors how many children from seven schools pass through the checkpoints, and EAPPI, which is responsible for monitoring the two checkpoints that the children of Qurtuba school must pass to go school.

As three of us in CPT-Palestine, including our Palestinian teammate and two members of the EAPPI team waited in the cold outside checkpoint 56 for UNICEF to arrive, we discussed what we would do if Israeli soldiers denied any of us entry through the checkpoint. Since late 2015, only people on a military list of approved people are allowed to pass. At even higher risk of denial of entry was our Palestinian team member and we knew that she was both anxious and excited about the opportunity of being in an area where normally the military deny her the right to be.

EAPPI lead the way with Mr. Cappelaere and we followed closely behind. That morning, because of the presence of UNICEF everything went smoothly. The electronic turnstiles were not locked as each person passed; no one was asked for their name, country of origin, passport or ID papers. Not one of us was physically or verbally intimidated by the Israeli Border Police. Even more surreal was the escort from two young soldiers who smiled and were not in full military gear or carrying guns. Despite knowing that this is not normal reality we were relieved that we had all been allowed entry.

As we walked we all took the opportunity to speak with the UNICEF staff about the work we undertake in the area and the difficulties that all Palestinians face every day and particularly in this area. Our Palestinian teammate couldn’t really believe that she was there in an area she had been able to go to as a child but was now denied.

The final approach to the school is up a stone staircase where the second checkpoint is located. It is more of a gate than a substantial structure but that does not matter because normally the presence of military has the same outcome, intimidation, delay or denial of passage.

At the Qurtuba principal’s office, the school staff, the Hebron Mayor and the Director of Education and the Principal awaited us. All three shared the difficulties of children obtaining a normal education when their life is governed by a military occupation and settlers who have no hesitation in using violence, even against very young children. A number of the children attending the school receive psychological support for trauma. Students at the school as old as ten still wet their beds due to what they have seen and experienced.

We learned how soldiers often delay teachers at the checkpoint as well as the children and that just that morning the Principal who has worked at the school for five years had been held up for forty minutes because the soldiers said her name was not on their list.

The UNICEF visit was to be just over an hour and the staff were already running late but they took the time to listen to all that was said and respond. Before the visitors left, the principal gathered a group of children together of all ages to sing a song of courage and resistance. The singing was led by a boy of no more than ten and he sang with great heart and gusto. Many of us were in tears, and at the completion Mr. Cappelaere gathered him up in his arms.

As we left the school the same two soldiers were waiting for us at the bottom of the stairs and they engaged the UNICEF director in conversation. Mr. Cappelaere was diplomatic in his response but he made sure to speak about the detaining of the Qurtuba principal that morning and the difficulties for children getting to school. These children, he said, deserve the same right and opportunity to an education that he and the soldiers had had.