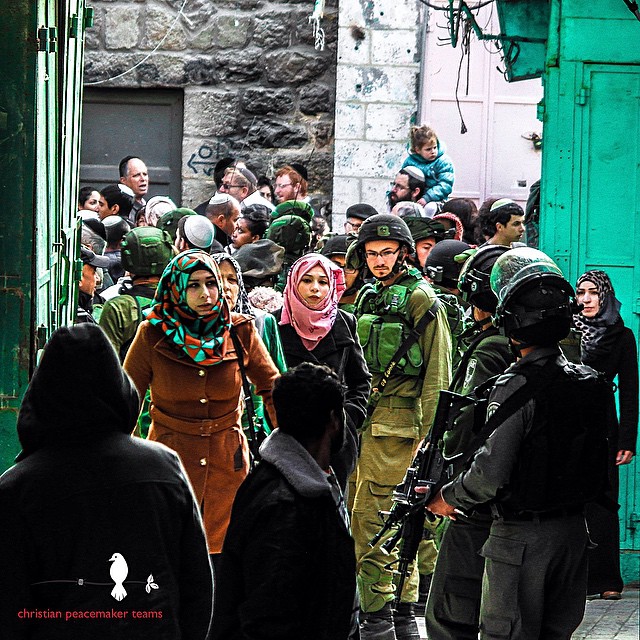 Every Saturday, Israeli and foreign tourists gather in Hebron’s Old City for a tour. On this tour, visitors are given a false and racist history of Hebron that denies the legacy of Muslims and Jews living together for centuries. The tour is accompanied by dozens of Israeli soldiers and Border Police, who ID check and detain Palestinians. In December 2014, soldiers detained 39 Palestinians, including 14 children, and thereby preventing them from leaving or returning to their homes. Between December 2014 and March 19, 2015, soldiers invaded 35 homes, mostly to use these families’ rooftops as look-out posts. Settlers and tourists frequently chant as they walk through Palestinian neighborhoods, and sometimes yell threats at local children.

Resistance occurs every week. Palestinians who live in the neighborhood refuse to be bullied into staying off the streets. Many document the tour with their phones and video cameras.

We at Christian Peacemaker Teams – Palestine started a petition just over a month ago, demanding that the Hebron Fund, the group that organizes these tours, cease this weekly harassment of Palestinian neighborhoods. To date we have collected over 450 signatures.

You can download the half-sheet individually HERE, or in a print-ready format HERE.

Since 1967, radical right-wing Israeli settlers have occupied a number of buildings and formed illegal settlements inside Hebron’s Old City. These settlements house at most a few hundred settlers and are guarded by an immense regime of checkpoints, road closures, guard towers, military outposts, and military patrols.

Because settlers refuse to interact with the local Palestinian population (in fact, a major goal of the military occupation is the slow starvation of the Old City economy and people), the settlements and accompanying occupation forces are financially unsustainable.

The same is true of the entire project of illegal settlements in the Occupied West Bank. In 2012, the Israeli government allocated 60.3 million shekels ($15 million US) to support settlements, but spent nearly 272 million ($70 million US). This past year, Prime Minister Netanyahu allocated 70 million shekels ($18 million US) to build infrastructure in the Beit El settlement. This year, Israel will allocate nearly $35 million US to the World Zionist Organization’s Settlement Division, which funnels the Israeli government’s money to support settlements. This disproportionate funding also hurts Israel’s poor and working class. Foreign and Israeli banks and international companies provide services to settlements that are denied to Palestinians, and Israel intentionally obscures the origins of settlement products so they can qualify for preferential access to European Union markets.

This is where the Hebron Fund comes in. The Hebron Fund is a Brooklyn, New York-based non-profit that organizes this tour to support the Israeli settlements that sit on top of Hebron’s Old City. The Hebron Fund raises money, primarily in the United States, to support settlements and a military occupation that are illegal under international law and financially unsustainable without outside contributions. The Hebron Fund claims to support cultural events, but their money can be used to buy weapons, vehicles, and other “security” items used to terrorize Palestinians.

For Purim this year, the Hebron Fund fundraised to support such seemingly positive things as meals and the Purim carnival. But Purim has a dark history in Hebron – in 1994, on the day of the holiday, US-born settler Baruch Goldstein walked in the Ibrahimi Mosque and massacred 29 Palestinian Muslim men while they prayed. Last year, the Purim Carnival camped outside a Palestinian school and trapped the children inside, while settlers yelled threats and blared loud music. This year, Palestinian schools wisely let their children go early, but families walking the streets during the day encountered dozens of military vehicles and random ID checks. After Purim ended, young settler men in Beit Hadassah threw their empty wine bottles into nearby Palestinian homes. These are just a few examples of the oppression and harassmentt Hebron Fund explicitly or implicitly supports.

Internationally, many Jewish people have protested against the Hebron Fund. Organizations like J Street U came out in opposition of the Hebron Fund’s inappropriately-named “Hebron Aid Flotilla” fundraiser. Hundreds of people gathered to protest the “Flotilla.” Hundreds more protested and called on the New York Mets to cancel a Hebron Fund dinner at their stadium.

This resistance will continue, and it will grow. We encourage everyone to use our pamphlet in engaging their local community, and we ask all people of conscience to stop donating to the Hebron Fund and other organizations that support violent settlements in the West Bank.