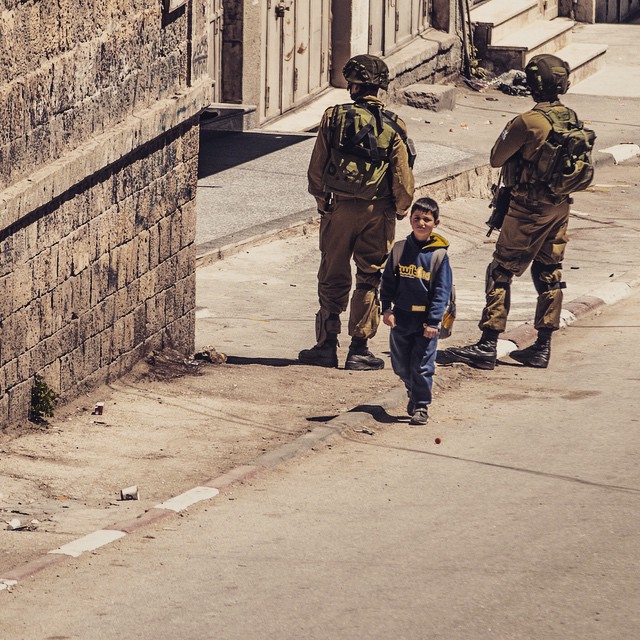 Palestinian residents of Hebron faced increased militarization in their neighborhoods, as occupying Israeli forces continued in a trend of using holidays as additional opportunities for oppression.  In the days surrounding Passover, CPT witnessed a surge in the amount of Israeli military and a rise in the restriction of movement for Palestinians.  These are some of the incidents of oppression that CPT documented throughout the week:

Tuesday 31 March—In the continuing settlement expansion in the Abu Rajab building, Israeli forces put up several concrete blocks forming a wall next to the building.  Speculation rippled throughout the Palestinian neighborhood as to what the military’s intent was with this construction.  When CPTers questioned the purpose of the wall, one Israeli soldier eventually muttered ‘Pesach’.  Israeli soldiers also occupied an office between the Abu Rajab building and Al Fayha Elementary School.  CPTers saw computers, maps, and military posters inside the building and military trucks, satellites, and other equipment parked outside.

Wednesday 1 April—Students and teachers arrived to school to find that Israeli forces had locked the front gates of Al Fayha Elementary School. This came after two days of undisclosed military activity and construction in buildings adjacent to the school. 250 elementary school girls were required to enter their school through a back alley and study next door to unknown military actions.  The principal asked CPT to provide a protective presence for the next week as children were coming to and leaving school.

Thursday 2 April—Palestinian girls from Al Fayha Elementary School tried to make sense of why the IDF parked a military vehicle directly in front of their school, blocking the front doors.  Several of the small children anxiously ran past the soldiers on their way between home and school.

Friday 3 April—As the start of Passover approached, Israeli forces increased their patrols throughout the Old City of Hebron and tightened up the flow of civilian traffic through military checkpoints.  During one such incident, Kamal Saleh al-Batsh was arrested for physically not being able to spread his legs far enough during a military body search because he has stainless steal inserts in his legs.  Israeli soldiers blindfolded him and tied him up before leading him away.

Sunday 5 April—Israel closed the Ibrahimi Mosque to Palestinian Muslim worshippers for two days during Passover celebrations.  Meanwhile, Israeli soldiers and Border Police entered the H1 area of Hebron—which is supposedly under Palestinian Authority control—in preparation for a group of Israeli settlers making a pilgrimage.  The Israeli military searched Palestinian houses, forced shops to close, and then escorted the group of settlers through the H1 area of Hebron.

Monday 6 April—A special Passover settler tour made its way through Hebron’s Old City. Israeli soldiers and border police closed Bab il Baladiya by blocking the way with two military jeeps.  The IDF, Border Police, and civil police in plain clothes also entered the Palestinian market in preparation for the tour, with soldiers positioning themselves at intervals along the way.  Five large groups of settlers and religious tourists, ushered by Israeli forces, descended from the military base and toured through the market over the course of three and a half hours.

These incidents of Israeli military aggression, and other cases of oppression and discrimination in Hebron, violate various articles of The Universal Declaration of Human Rights, including the right to education, the right to religious worship, and the right to freedom of movement.  And it is lamentable that these violations of human rights come during Passover, a time commemorating freedom from captivity.