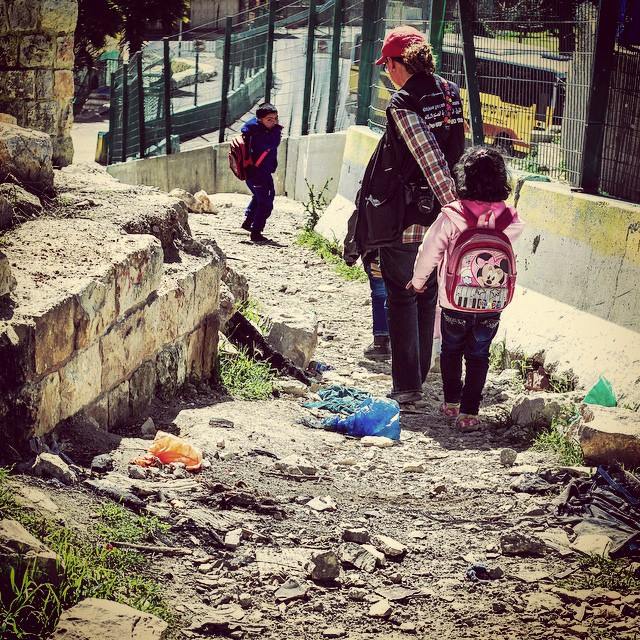 The border police argued with my teammate about permission to walk the paved “settler path.”  Sound bombs and tear gas were exploding at Salaymeh, a checkpoint nearby. According to the soldiers, we were OK, but the boys and girls with us could only walk through the adjacent rocky path.

Border police uttered Hebrew words through his radio. My teammate engaged the soldier. The children looked afraid. I pulled out notebook and pen, got down on my knees, and started drawing.

“Pintemos un payaso,” I told them, knowing they would not understand. First the head, then the nose, eyes, ears, hair. I drew a clown.

One of the girls smiled timidly and told me something in Arabic.

I started again: head, nose, eyes, ears, hair. My drawings amused the girls. They giggled. The boys pretended not to be interested, but nibbed discreatly so they could still see my art.

A flock of sheep paraded nearby.

“Pintemos esas ovejas!” I said, and started drawing the sheep. The children laughed and warmed up to me saying different things at once.

“No entiendo nada,” I  said, “pero pintemos un pollo” and I tried to draw a rooster.

I was kneeling on the pavement, giving my back to the soldier, and we were having fun.

“Your passport, please,” said the soldier to divert my attention.

I pulled my passport out and gave it to him, still facing the children.

“Where is the number!” said he.

“What number? Why do you need my number?” I said with curiosity.

“I do not need your phone number, I need your passport number,” He affirmed.

“And why would you need my passport number? I asked.

“I need all the information.”

“You have all the information. You have my passport. I will not tell you where to find the number because you already have it.”

One of the children pulled me down and pointed at the CPT logo on my vest.

“Ah! Pintemos la paloma!” I said,”Let’s paint the dove!” I turned to a clean page and traced the CPT dove. Another girl set her finger over the dove again.

“Tell me which of these is your passport number!” the man insisted.

“I will tell you when you tell me why you need it.”

I knew this could not continue much longer, or things would soon escalate. The officer asked my teammate for his document. I gave notebook and pen to one of the girls so she could draw something else. Then I stood up and faced the officer.

The Border Police exchanged some words with my teammate, looked at me in dismay and returned both of our IDs.

“Halas! Let’s go the other way,” said my teammate, and started heading up.

In Al-Khalil, the sophisticated Israeli military ensures that small children know that their soft Palestinian feet can only walk on the broken path.

Earlier today, we were told that these #Palestinian #kindergarten students could not walk on the paved road and must walk through the rubble and garbage on the other side of the fence. Immediately after these kids were denied access, the Border Police allowed an #Israeli #settler man to walk down the street. #Peace_On_Earth Consider a contribution to the Christian Peacemaker Teams to support peace and justice. Make a difference, click here: bit.ly/CPT_Donate #SchoolChildren #israelioccupation #freepalestine #peace #love #apartheid #israel #occupation #nonviolentresistance #oppression #Palestine #Hebron #الخليل #المقاومة #فلسطين #الاحتلال #שלום #אהבה #צדק #ירושלים #חברון #פלסטין #الحرية#