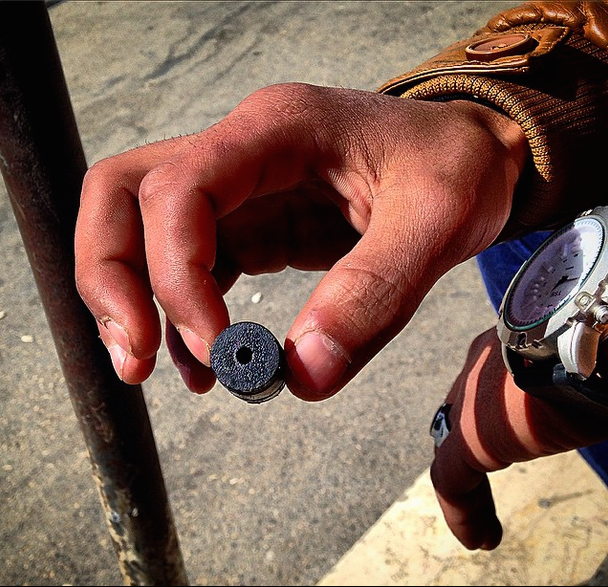 I have been thinking a lot about bravery recently. It probably began last Friday, standing on the side of the street documenting Israeli military assaults on Palestinian protestors. I heard a thud as a bullet slammed into the metal door up the street, and turned to look at my teammate with confusion — was that really a bullet? — when several rubber bullets came skipping up the street and stopped near my feet. At that moment, I realized that I would hate telling this story to friends in the United States.

The responses would be predictable — “you’re crazy!” “You’re so brave!”

As I walked over to pick up the rubber bullet, I looked across the street and saw several young Palestinian men my age, trying to decide if it was worth attempting to march down the street or not. And at that moment, I understood why I would hate telling this story. The truth is, I’m actually scared of a lot of things — bullets, heights, snakes, big spiders, etc. I am very sure that I would not be out protesting if I was a young Palestinian man, growing up with constant military harassment, family arrested and tortured, friends killed, economic strangulation. I felt safer on that street because of my CPT hat and my international passport.

We can always find someone braver than us, someone who is sacrificing more. And often people do not sacrifice by choice, and they are brave because their very existence is resistance and there is no third option between resistance and death. Those of us who do not face this choice can find ourselves seeking moments of bravery, opportunities to prove our toughness by facing down the forces of violence — the white/male/middle-class/USAmerican Savior Complex.

In the Gospel of John, Jesus is asked to come heal Lazarus. This would mean traveling to Judea, where the political leaders want Jesus dead. He holds off for a bit, but when he decides to go, Thomas says, “Let us also go, that we may die with him.”

Thomas wants to be brave. He identifies the movement Jesus is building as about bravely facing death (unlike Peter, who at other points thinks that Jesus is an idiot for saying he will die, cf. Matthew 16). Thomas sees Jesus’ death as the central focus. Thomas would do well in a conservative evangelical church.

But this is not the story in John 11. Jesus does head down to Judea, and Lazarus has been dead for four days. If the point is a brave death, Jesus could have just sat down and waited for the political leadership to show up and kill him. Instead, he weeps with his friends in the death of their friend, he goes with them to the tomb, he asks for the stone to be rolled away, he prays, and Lazarus is raised from death. And then Jesus says this: “Unbind him, and let him go.”Jesus frees Lazarus from the power of death.

This message, this Good News, gets shouted throughout the Gospels and the letters of Paul — the movement is about conquering the power of death. Jesus does not come to Judea to bravely face death, but to bring life into the midst of death. His call is not to die bravely, but to live freely.

This is one of the biggest lessons to learn in our work — we cannot let the Powers set the agenda. Our organizing, like Jesus’, has life, not death, at its core. Our lives, the lives of our friends, and the life-blood of our ancestors and our community, these must set the rhythm and tempo of our work. Jesus says, “Are there not twelve hours of daylight? Those who walk during the day do not stumble, because they see the light of this world. But those who walk at night stumble, because the light is not in them.”

I know that our friends in Youth Against Settlements, Hebron Defense Committee, and other organizations, don’t go to protests to get shot. They go because they are alive, and to live freely is to resist the forces of death. The Palestinian resistance, stretching back since before the ethnic cleansing of 1948, has been struggling to live freely and resist death for many decades.

This month marks the 50th anniversary of the march from Selma to Montgomery in the United States, another movement moment where people decided to live freely. And many of them paid for it, just as Palestinians and oppressed people everywhere cannot live as they want without violent attacks. And this is a lesson that all of us do well to remember. We do not win if we go out onto the streets looking to bravely face death. Though we may face bullets and repression, we go out because we are alive.

As Easter approaches, I have this to say to the forces of death all around me — expect resistance.

Pictured here, an #Israeli sniper gets up after firing several rounds of Ruger .22 shells into the non-violent protesters near the Old City of Hebron on February 27,2015. Escalations occurred at the Bab al-Baledeyah as Israeli soldiers and border police unload a sortie of sound grenades on protesters. #Palestinians and internationals protested the closing of Shuhada Street, once a vibrant hub of Palestinian commerce in #Hebron. One 21 year old Palestinian man was choked during an arrest, despite being non-violent during the march. Video footage shows the man just chanting in the streets. At least six people were injured during the Israeli assault on Palestinian protesters. Shuhada Street is just one example of Israel’s system of apartheid. The street is exclusively barricaded of for Jews and internationals, where as Palestinians that own generational homes, have been shut off from the street for over 21 years, following the Al-Ibrahami Mosque massacre. 21 years ago, Baruch Goldstein, an Israeli colonial settler, originally from Brooklyn, NY, massacred 29 Palestinians during prayers at Al-Ibrahimi Mosque in Hebron. Goldstein was a doctor in the Israeli army where he refused to provide medical treatment to non-Jews...he was also a follower of the Meir Kahane, another Brooklyn-born settler who openly advocated for the killing of Palestinians.#TAKE_ACTION YOU can take a stand against injustice. YOU can resist oppression. Make a difference, click here: bit.ly/CPT_Donate #Repression #clashes #israelioccupation  #freepalestine  #peace  #love  #apartheid  #israel  #occupation  #nonviolentresistance  #oppression  #Palestine  #Hebron  #الخليل #المقاومة  #فلسطين  #الاحتلال  #שלום  #אהבה  #צדק  #ירושלים  #חברון  #פלסטין  #الحرية