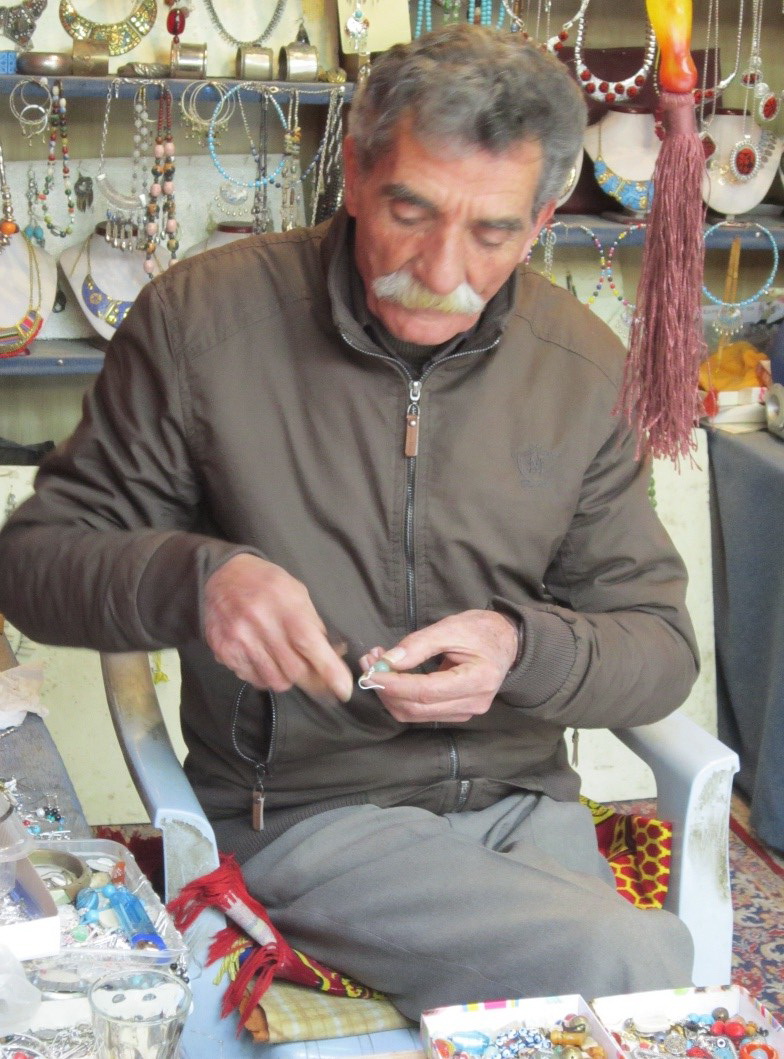 Mospah follows in the footsteps of his father and grandfather. He has been making and selling jewelry in the same shop in the Old City souq for fifty years.

Why does he do what he does, where he does? Because it’s a family tradition, part of his heritage. He has a strong sense of rootedness, from both his father, whom he reveres, and his grandfather. Mospah has ten children, seven daughters and three sons, and thirty-seven grandchildren. The entire family continues to live in Hebron.

A supplier brings him materials from Saudi Arabia: stones from Saudi Arabia, Yemen and Afghanistan plus materials sourced locally. Mospah then crafts these into a wide variety of jewelry: bracelets, necklaces, earrings, prayer beads. He also has a small line of low-cost costume jewelry responding to the demands of a range of customers.

Thirty years ago, business was thriving in the Old City souq. Not so today. Mospah often passes days at a time with no one buying. Business is difficult but a little better than after the second intifada.

If it weren’t for the Occupation and the Israeli military control of much of it, the Old City could be alive with tourists. The beautiful stone architecture and the multitude of small shops maintain the Old City heritage. Unfortunately, many of those shops are now closed due to lack of customers, the constant Israeli military presence and the trash thrown down by the settlers who live just over the streets.

The settlers and Jewish tourists don’t hassle Mospah when they tour the Old City on Saturday afternoons or evenings because his shop is located outside their normal route. They are also not a source of customers as they do not enter the Palestinian areas of the souq.

Why does Mospah stay when he could make more in another location? Because the business, the shop and the Old City souq are in his blood. He hopes to pass the business and shop on to the next generations to maintain the family tradition. That tradition lives on in his name: Abu Taz, Father of Taz, his son, who is named after Mospah’s father.