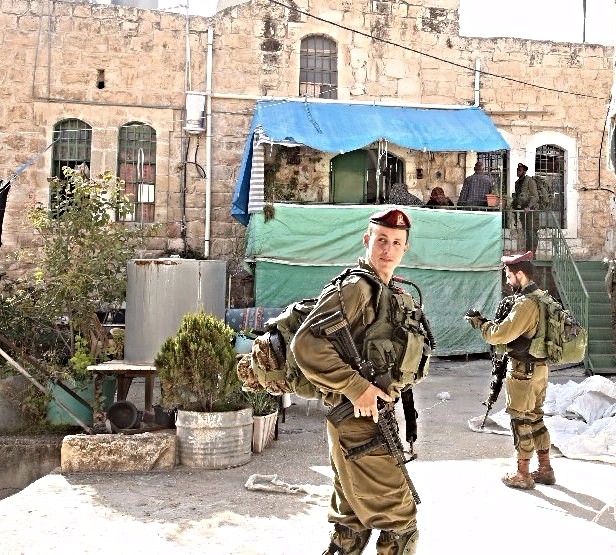 Israeli soldiers invaded the home of CPT-Palestine’s neighbors on the morning of Tuesday, 6 December.   They found no weapons in the residence, but they still seemed to feel entitled to punish the family.  They trashed the home, strewing the family’s possessions about, insisted on interrogating the sister with mental disabilities‑-although her father and sister told them about her disabilities–and denied her access to her seizure medication.   Furthermore, they forced the family to sit outside their home for three hours and told the father they would be back to arrest him, although they never returned to do so.

CPTers arrived on the scene in the early afternoon after their immediate neighbor reported seeing soldiers forcing the family outside their home from across her roof.  She met them there and tried to talk to the family, but soldiers intervened, pushing them back.  They repeatedly asked if CPTers were TIPH (Temporary International Monitoring Presence in Hebron) and when they realized they were not, they ordered them away, saying that only TIPH had the right to be monitoring situations such as these.

The CPTers moved back and attempted alternately to distract and engage the soldiers in order to be able to stay outside the house with the family.  The husband of one of the CPTers speaks Hebrew and called during the situation.  He tried to tell her what to say in Hebrew, which she mispronounced, provoking awkward laughter.  Another soldier shouted, “It’s not funny.”

“No, invading people’s homes is not funny,” the other CPTer said.

The CPTers followed the squad through the Old City for a short way after they left the family, but then decided to return to their own building, because their neighbor, who shares an entrance to their building was nervous that the soldiers would attempt to enter their building, which they did not very long afterwards.  They also found out that that soldiers trashed the Youth Against Settlements building in the Old City.

The next day when CPTers returned to their neighbors to clarify details about what happened, they asked how the soldiers’ threat to arrest their father, obviously meant only for intimidation, had affected him.  His older married daughter, who comes over regularly to care for her sister and was trying to set the house to rights said, “He doesn’t care.  He didn’t do anything.”