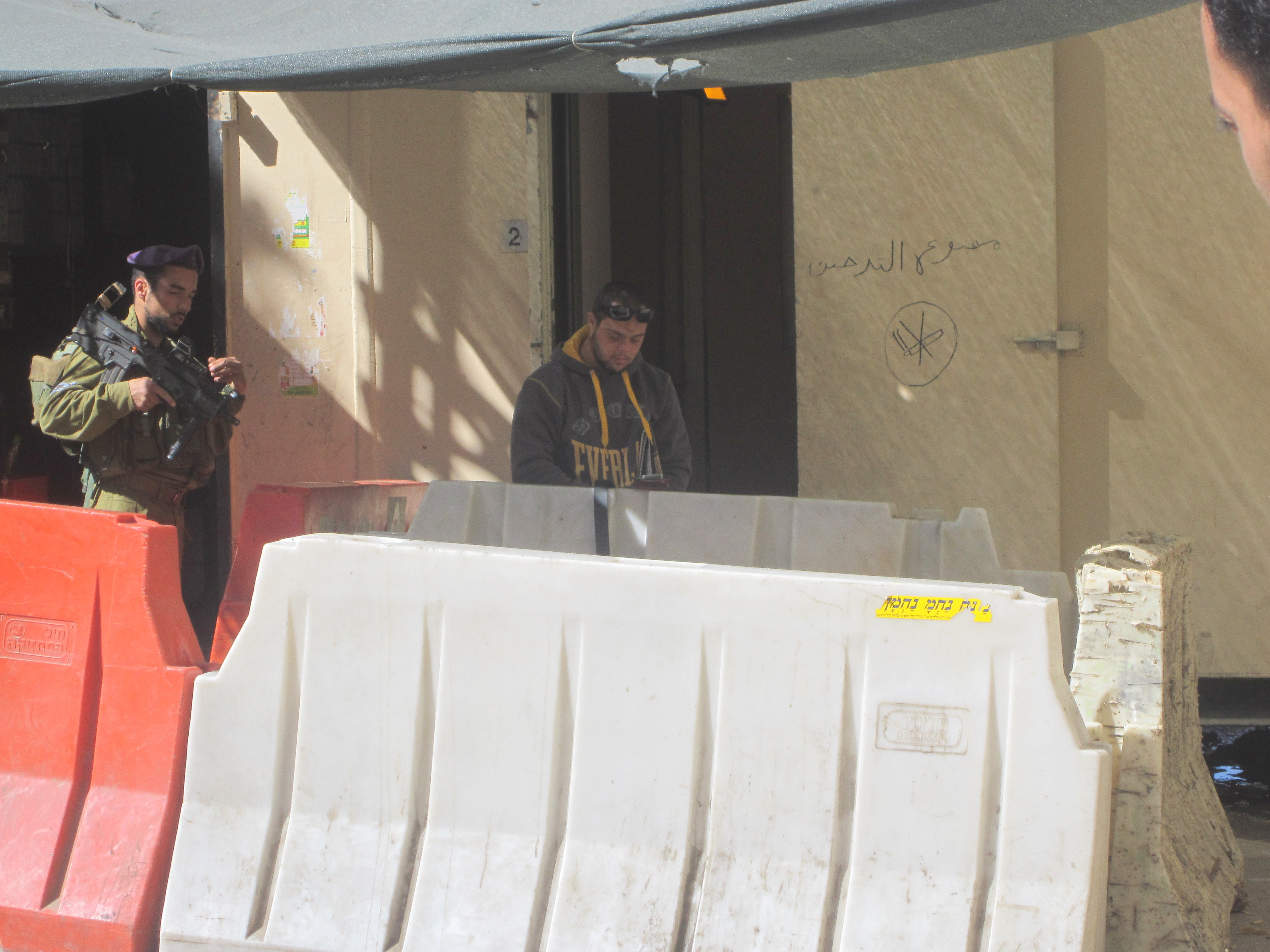 Offending snacks photographed by EAPPI after the staff person was finally released by the soldiers.

A few days ago, my teammate Alwyn and I were sidetracked by phone call as we left for a food shopping trip.  Another international monitoring group here in Hebron asked us to check out a situation at the container checkpoint that separates the H-1 area (under nominal Palestinian control) from H-2 (under full Israeli military control) in Hebron.  Soldiers had stopped  a staffperson from a kindergarten near Qurtuba School who was bringing in a box of snacks for the children, which apparently the soldiers running the checkpoint deemed a security risk.

The staff person had been there an hour by the time we got there and would be there for more than another before the soldiers finally let him go.  In the meantime, Alwyn and I became involved in another small human drama.  A young man with Down’s Syndrome came through the checkpoint.  The soldiers were searching most bags at that point, so I don’t know if initially they decided to be extra thorough with him, but perhaps because he made them uncomfortable, something compelled them to make him take his belt off, pull up his shirt, take off his shoes, and pull up his pants legs.  They also went through the newspaper he was carrying page by page to see if it concealed anything.

He continued up the hill afterwards, belt in hand, cursing.  He would try to put the belt through the loops of his pants, then start re-enacting the scene of his humiliation again and again, yelling and shaking his fist.  Alwyn and I joined him and tried to calm him down.  An older man came by to help him with his belt, and through him, we learned the young man’s name, Abed*, and that his father had died recently.

What seemed to restore his good humor was showing him my shopping list, and telling him, in Arabic, what we needed to buy (apples, bananas, milk etc.)  He sat with us as we waited for people from the Ecumenical Accompaniment Programme to relieve us.  At one point he nudged me with his elbow, smiled, and said, “I’m Jewish.”  “Really?”  I asked.  The smile widened, nearly splitting his face in half and he nodded vigorously.

Before I joined Christian Peacemaker Teams, I worked with developmentally disabled adults.  I have thought over the years I have worked in Hebron, that while people with mental disabilities here sometimes suffer worse treatment in the form of mockery on the streets than they do in the U.S., they often feel that they are more a part of the community than the people I worked with did.  Still, I guess I do expect that soldiers are going to make special allowances for a young man like Abed, and not assume he is a criminal, which seems to be their default assumption for most young men in their twenties.  I know that soldiers have taken away boys as young as seven or eight on suspicion of throwing stones.  I worry what a strong young man like Abed might face behind that gate where Israeli soldiers take the boys and men they detain.  And I worry that we might never really find out what happens to him if they do.

*Not his real name