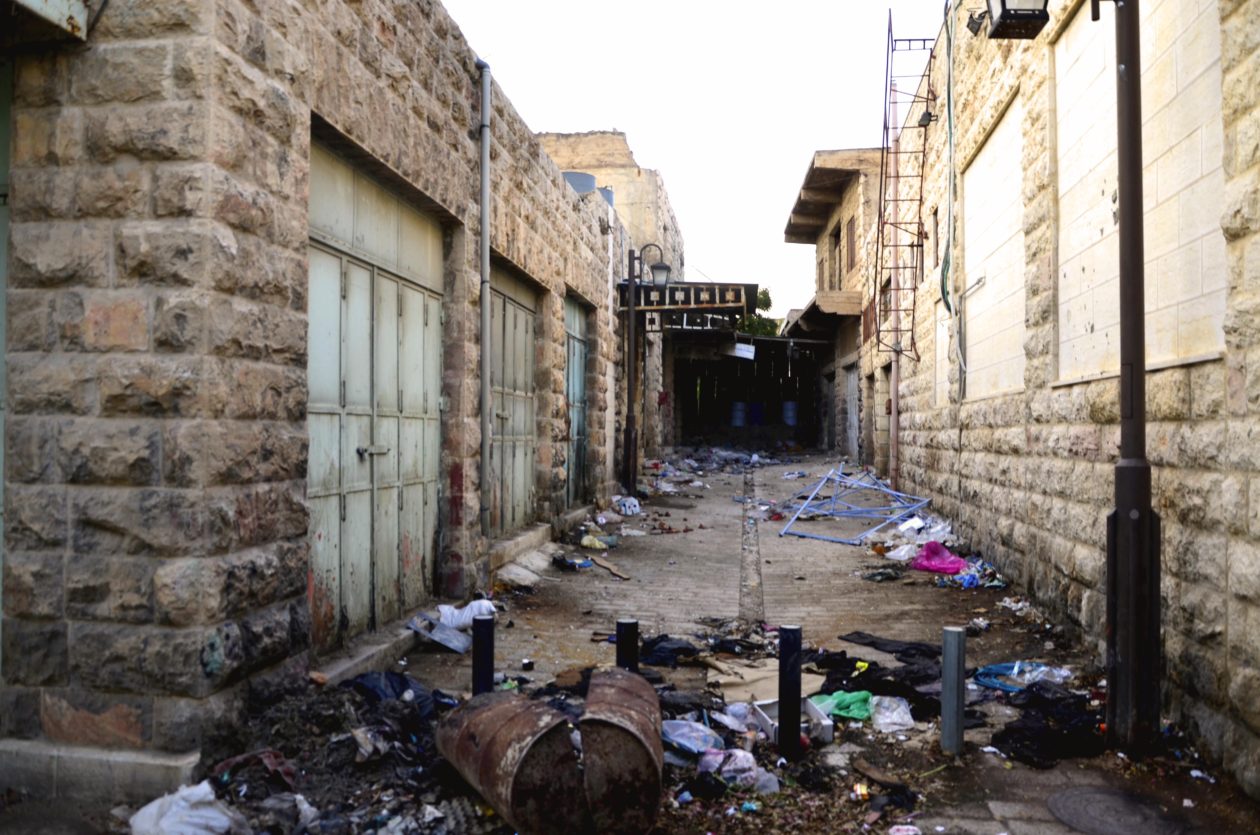 The photo shows a street that was called Gold Street. In 2001 it was a prosperous and bustling business area where the shopkeepers became rich servicing those people who needed to buy gold for their weddings. Soon it was declared part of a closed military zone and the merchants were forced to move their businesses uptown. This was another loss for the old city, which depended on the business that came into the area for survival. A pharmacist stated that at that time there were 1500 shops operating in the old city. Now, there are less than 150. So you can see what happens when 2000 soldiers with heavy weapons move into a neighborhood and scare all the citizens away. They came to protect the 500 settlers who forcibly moved themselves into the old city.

Just around the corner from the CPT apartments is the main street leading to the tomb of Abraham. It was lined for about 200 yards with shops selling fancy carpets, but they are not there any more, after rampaging settlers threw fire bombs into them one day. The stores have not reopened because Palestinians have been forbidden to walk on the street, their main street, for 15 years. Many parts of the old city resemble a ghost town, with streets empty of people, shuttered shops, and no activity. Many hoped that a political solution would be found within ten years and life would return to normal. But things have only gotten worse, with the reinforcement of many checkpoints and more restrictions on the movement of people in this sad place.

The old city of Hebron is small. It takes only about 10 minutes to walk along the narrow alley, just wide enough for one car, which forms its main thoroughfare. There used to be about 10 ways to enter or leave the old city but now there are only two. And Palestinians, some 200,000 of them who live uptown, would love to visit the oldest parts of town just as people in other cities of the world love to do. But those two remaining entrances feature checkpoints and gun posts where Israeli soldiers or border police likely will subject you to questioning, search, and examination of your ID—which if you have forgotten it at home would subject you to immediate arrest and detainment without charge. Basically, it is like going through the security section of our airports. So although people generally avoid going to the old city, they do try to live normal lives, sending their children to school, working hard, and carrying on as best they can with an incredibly strong spirit of persistence and hope.