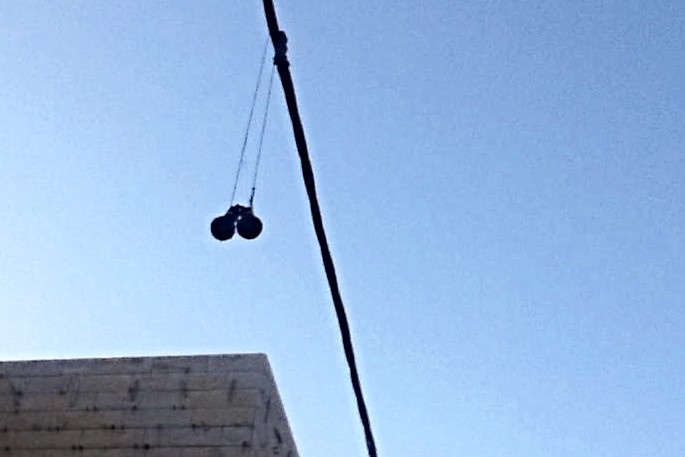 At 7 AM while walking to monitor a checkpoint while on school patrol my partner and I looked up and saw this. It is something you will never see near a school in the West. We are all familiar with electric wires over which pairs of running shoes have been tossed and sometimes remain hanging there for days on end. But this, probably unique to this place, is a pair of tear gas canisters which are often used against students on their way to school. In our apartment we have a basket full of these objects, along with spent bullets, unexploded bullets, and metal bullets covered with rubber. But I am happy to report that so far in the three weeks I have been here, we have not observed their use against students, nor the use of skunk water cannons, which you can imagine is pretty awful, or sound grenades or concussion grenades.

In a conversation with the principal of the Ibrahimi school when I asked him about enrollment, he replied that this year 2016 they have waived the fees for the families of all students. The student body has been reduced from over 280 to less than 250 boys in one year. This means that families, fearing for the safety of their children are deciding to move out of the old city to uptown neighborhoods which are safer. This presents a risk that their homes will be taken over by radical settlers with the support of the army and the police, people who will fracture the neighborhood and make life miserable for all the people who live nearby. In other neighborhoods this has meant the tossing of garbage into Palestinian backyards, stolen bicycles, and adults walking around with automatic weapons freely. Hence the small measure to persuade families to stay in their homes. Hopefully this strategy will work.