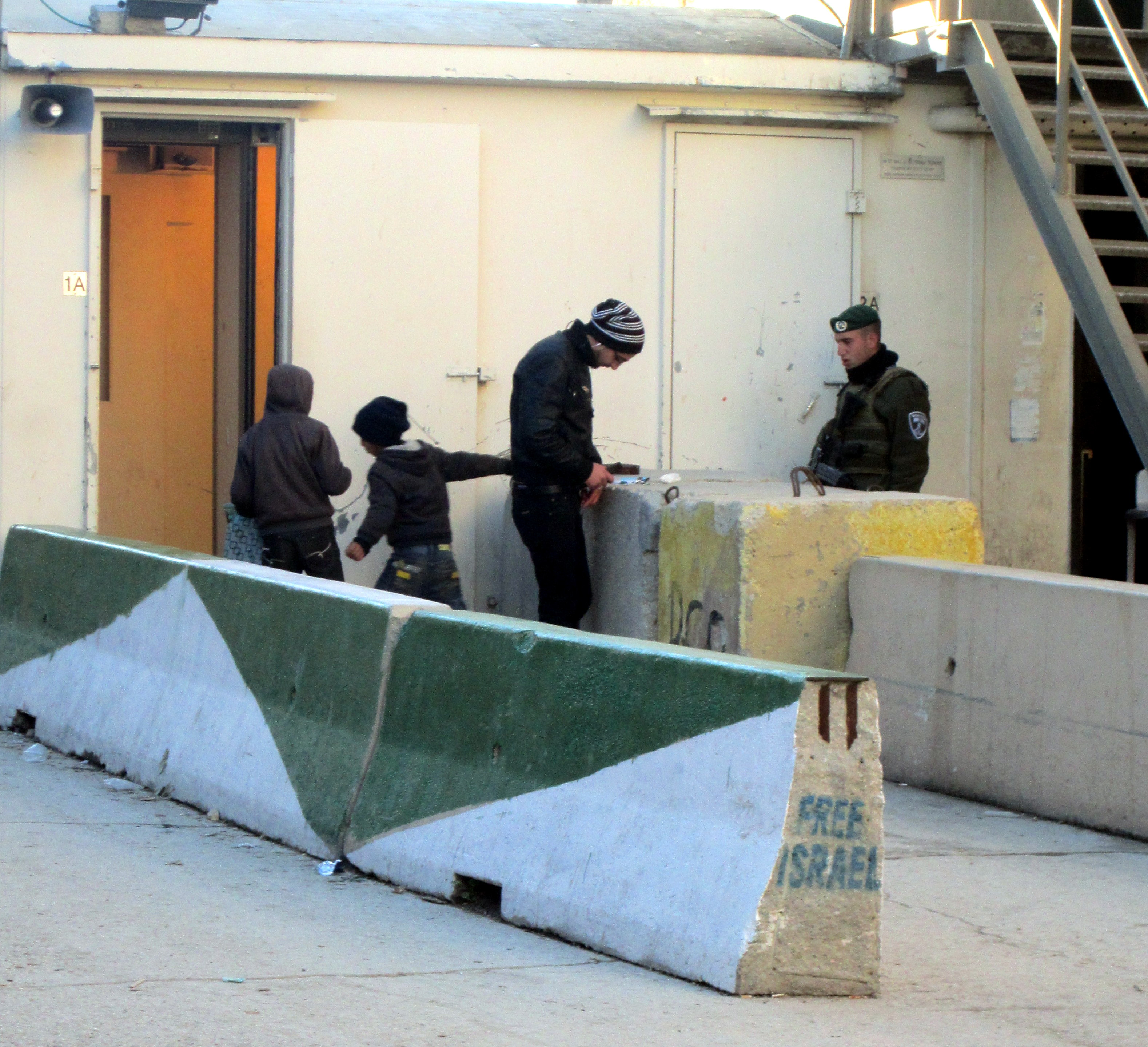 The most routine part of CPT Palestine’s work in Hebron is the monitoring of checkpoints through which students and teachers must walk to get to schools.  For years, they have been stationed at the Qitoun checkpoint/Checkpoint 209*, which stands between boys walking from the H-1 area to il-Ibrahimi school and girls walking to al-Faiha school as well as their teachers.  This semester, after daily clashes began erupting at four other H-2 schools near the Salameh checkpoint/Checkpoint 29, CPTers (when they had enough people to do so) began monitoring Checkpoint 29 in the early morning and when school let out.

Students in the H-2 schools missed a large number of school days in the past semester because of a teacher’s strike and Winter Storm Alexa.  On 5, 10, 19, and 22 September  the gate to the Old City was closed, so children living in the Old City had to find an alternative route to school or they just didn’t attend.  When a soldier was killed on 23 September during clashes, schools were also cancelled.

Boys being forced to go back through metal detector after they’ve removed their belts.

Treatment of children and teachers by members of the Border Police varied.  Most often, they did not search their bags, but one day, 25 November, they searched thirty-three schoolchildren’s bags—which was probably related to clashes of the previous day.  Sometimes Border Police were offensive to teachers, asking for IDs, even though they knew they were teachers, having checked their IDs the day before, asking one if she carried a knife in her purse or summoning them by addressing them as “boy.”

Soldiers preparing to fire stun grenades and teargas at stone-throwing boys at back of Qitoun Checkpoint (209).

But the most serious incidents for organizations providing international accompaniment—because they affected the physical safety of children—were the clashes.  Clashes typically began when boys began to throw stones at Border Police and Border Police responded with stun grenades and tear gas.  Clashes happened over the Jewish holidays when the military moved the checkpoints to control larger areas.  Particularly at Checkpoint 29, they increased in number throughout October-December.  On 26 December, when boys threw stones at checkpoint 209, a badly aimed tear gas grenade from the Border Police went through the window of the el-Karaky family home and caused a house fire, destroying everything.

Members of the Nahal Brigade currently stationed in Hebron and Border Police at times have tried to lecture CPTers and teachers about stopping the boys from throwing stones, but as one exasperated mother who was trying to get her children across the street near Checkpoint 29 noted, “If the soldiers were not here, the boys would not throw stones.”

CPT Palestine works in cooperation with the Ecumenical Accompaniment Programme in Palestine and Israel (EAPPI) and the International Solidarity Movement (ISM) to provide accompaniment for the children and teachers in all of the H-2 schools.

*TIPH, an international monitoring group in Hebron sanctioned by both the Palestinian and Israeli governments, has assigned each checkpoint a number.  CPTers need to use the numbers when calling TIPH for assistance.